Looks like Adam Kamien was running short of his typical showbiz crud this week - managing only 2 smutty pictures.

So how does he fill the slack? The lazy man's way, of course. Sloppy trawling of the internet followed by some slipshod cut-and-pasting. 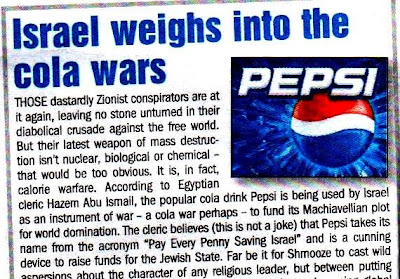 But, really. Did it have to be that stale and ancient chestnut that’s been forwarded to and fro for years by millions of emailers? (A google search for "Pay Every Penny Save Israel" results in almost 60,000 hits - going back a long, long time!)

To save Kamien further time and effort (after all, he must be SO busy), here's a piece to help fill next week's column:

Most of the people avoid Pepsi and Coca-Cola for various reasons:-
Because of harmful chemical contents such as excessive carbonates, etc.
Because it is a Jewish product and they are supporting and funding Israel's terrorist activities.
Now there is yet another reason which is more dangerous i.e. "Haraam" contents in these drinks.
The following news article has been published in Al-Riyadh Newspaper on 20th August 2006. This is the translation of the news article. Please see the attached news in Arabic.

The scientific and medical research says that drinking Pepsi & Cola leads to cancer because the key element is taken from Pigs sausage. The heavenly books Quran, Bible and Torah forbids eating Pork, as it is the only animal that eats dirt, dung and urine, which makes lethal and deadly fabric polluted germs and microbes.

According to a report published in Jordanian magazine, the head of Delhi University's Science and Technology Center , Dr. Mangoshada scientifically proved that the key element in Pepsi and Cola contains extract from the intestines of Pig which causes cancer and other deadly diseases.

The Indian university conducted tests on the impact of drinking Pepsi and Coca Cola which proved that drinking them lead to more rapid heart rate and low pressure. Also drinking 6 bottles of Pepsi or Cola at a time causes instant death. It also contains chemicals such as carbonic and phosphoric acids, citric acid which harms teeth and causes bone fragility. Bones kept in the Cup of Pepsi melts during the week knowing that the bones of the dead remain in the grave for thirty years. Research itself confirmed that the calcium dissolved in Pepsi and it weakens the bladder, kidneys, kills the pancreatic, leads to diabetes and infectious diseases.

Pepsi or Coca-Cola lovers nothing to worry as it is not the only drinks available on this earth, as we have other healthy alternatives such as natural fruit juices, canned coconut water, flavored milks, buttermilk etc., all of them are conveniently available even in the small stores.

This is not a surprise since the Coca-Cola, Pepsi producers are Israelis. i.e Zionists(jews), who would simply do anything on their part to destroy the peace loving muslims like they did to the lebonese civilians...
http://forum.mpacuk.org/showthread.php?t=15128
at 5:15 PM