Guest Post – submitted by a member of the Melbourne Rabbinate

Thank you to those behind the AJN Watch blog. You are providing an admirable service for the Australian Torah-observing community and we all owe you a vote of thanks.
There has long been a need felt for a public platform where the Torah's point of view - especially when it may be ‘non-politically-correct’ - may be aired. In addition to keeping watch on the AJN, your blog seems to also fulfil this necessity. The is a most welcome development. And I am convinced that the AJN has toned down its anti-frum rhetoric by a number of degrees since your arrival. There is still a long way to go, but every little bit helps.

However, al achshav baati, ie, an item in the recent issue of the Jewish News reporting on reform rabbi Fred Morgan’s recent officiating at the “burial of books and sacred texts containing G-d’s name and words of the Torah”.
(Actually, this AJN item could serve as an apt launching pad for a sermon on the topic of Reform Judaism’s theology and clergy - who have, tragically, long ago buried the Torah and sacred texts containing G-d’s name. But that is not the object of this present post.) 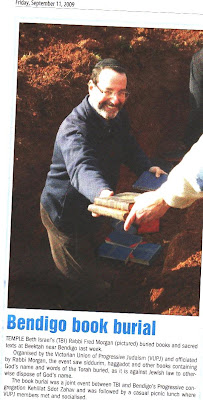 Before snapping pictures at this social/burial gathering out in the boondocks, someone should have reminded Morgan that:
1) Burial of sacred items is done in cemeteries – not in someone’s back yard.
2) From the look of the items pictured, it seems that they were in pretty good condition and as such may not be buried, and
3) When burying decrepit and torn volumes of holy sefarim, they must be enclosed in long-lasting containers that will ensure that the contents do not quickly deteriorate – ‘lemaan yaamdu yamim rabim’.

I realise that quoting Torah or Halacha to a reform rabbi is a complete waste of time – after all there are very few dictates of the Torah that they observe, still I find it my rabbinical duty and responsible to do so. Why? To warn any unsuspecting and unknowing Jew who may at some time consider emulating Morgan’s method of disposing ‘books and sacred texts’. Remember; discuss this with your Rav.

On the other hand, a colleague with whom I conferred regarding this post, pointed out that if the books buried in that backyard ceremony were items published by the reform movement, they would no doubt qualify to be categorised as sifrei minim. Thus the burial would have been appropriate. He is of course 100% correct and if that was the case, then for once a reform rabbi was acting according to the Halacha.
***
Meanwhile, whilst doing some research on the local reform movement I cam upon this item:

Selichot presents an opportunity for reflection and preparation as we enter the High Holy Days period. This year, we will commence Selichot with a film screening ‘Tackling Peace', narrated by Hugo Weaving, is the inspirational story of Israeli and Palestinian youths who unite over the game of Australian football. The film features legendary footballers Kevin Sheehan, Ron Barassi and Robert ‘Dipper' DiPierdomenico. http://www.tbi.org.au/news/74/

Nu, if Selichot won’t attract them, a movie surely will…
at 5:45 PM