Tim Tams: "He never gave up hope, he never lost sight of his goal" 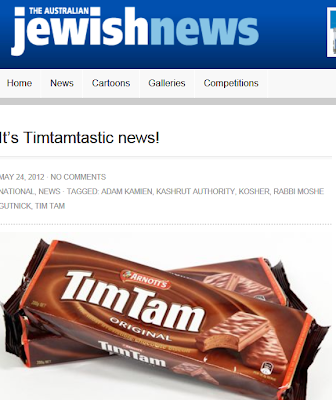 
Readers of last week's AJN will notice the newspaper celebrating an extraordinary Yom Tov. No, I am not referring to Shavuot but rather to the exciting and fantastic news that Rabbi Moshe Gutnick has convinced Arnotts company to produce "Kosher" Tim Tams. 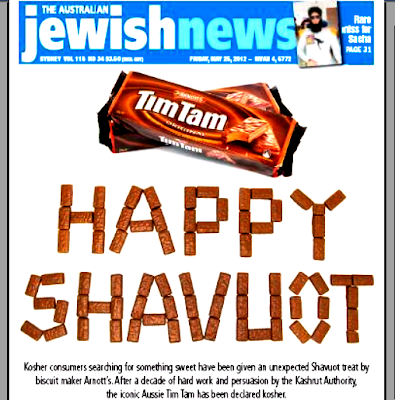 I must admit that those intellectual giants who administer the news on behalf of our community showed massive restraint when reporting this most amazing event in the history of the Australian Jewish community. 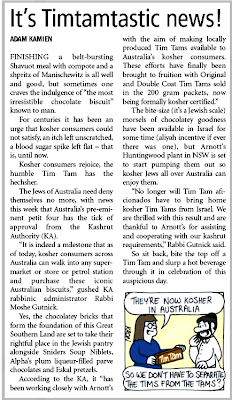 Yes, they actually limited the Tim Tam story to the front cover, an article on page 3 (squeezed in amongst a couple of molestation stories), a Kron cartoon and...drum roll...an editorial!! 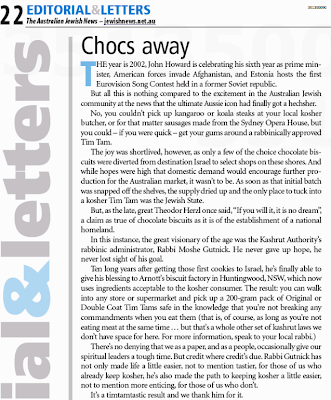 To quote their excitement: “It is indeed a milestone that as of today, kosher consumers across Australia can walk into any supermarket or store or petrol station and purchase these iconic Australian biscuits,” gushed KA rabbinic administrator Rabbi Moshe Gutnick. 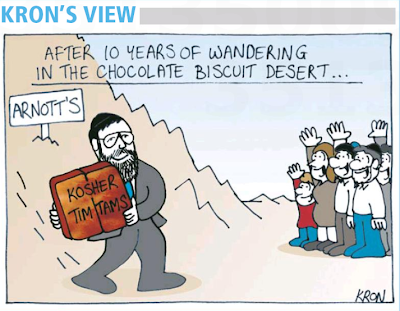 After all the recent public criticism of our rabbis - usually led by the  same AJN - isn't it  lovely to see them acknowledge that we still have warm-hearted rabbis who positively gush at the thought of Jews piling on the kilos. To quote: "He never gave up hope, he never lost sight of his goal"!


Though not the purpose of my post, a quick Google search will show that while the rabbi gushes on about his achievement, both he and the AJN fail to mention other issues associated with the product - health-wise and ethical.


If any reader is interested, here are a few links which show that there are others in the general community who won't recommend this delicacy:


This YouTube clip (WARNING: a non-tzeniusly dressed woman) lists all the unhealthy and even dangerous ingredients noted on the packaging.

And here's another clip.


And from this website:  The chocolate coating in Tim Tams is not made from cocoa, but a mixture of artificial colours of Tartrazine (102), Sunset Yellow (110), Allura Red (129), Brilliant Blue (133) and Caramel (150). These additives are all suspect carcinogens.


So despite becoming Kosher (and I am surprised at the AJN's excitement about this - it is usually full of advertisements for non-Kosher establishments and products), it is unclear if Tim Tams are good for you.


But back to the Kashrus issue.


Despite the well-known views of Rav M Moshe Feinstein zt'l who permitted the consumption of Chalav Akum (where there are govt supervision and penalties by the authorities for tampering or substitution), it is difficult these days, when Chalav Yisrael is readily available in nearly every communty of observant Jews, to find a Chareidi Rav who will these approve the use of  non-Kosher milk products. The fact is that most poskim hold that non-supervisied milk is actually 'treif' and if used in error the equipment has to be Kashered. This view is especially so amongst Chassidic groups - every single one. And Chabad, to the best of my knowledge, have certain stringencies regarding Chalav Yisroel that many other chassidim and Charedim don't require. Furthermore, even the Rabbanut Kashrut in Israel, which generally has lenient standards, is very strict on this.


A collection of quotes on the unacceptability of non-Kosher milk


So my question to the good rabbi is "Why?"
You being a thoroughly Frum Jew and a Chabad chassid who I have no doubt that Chalav Akum products have no place in your kitchen. Yes, I understand that being in charge of KA means that you must allow leniencies, especially for items that are necessary for certain groups of consumers. I refer to milk, butter etc.


But is it really so important that Australian Jewry gorge themselves with Original and Double-Coated Tim Tams?


I know that your NSWKA more or less stated (or admitted) that they have less stringent Kashrut standards that their Melbourne counterpart Kosher Australia. But really, is it necessary to go out of your way and make the effort to chase and convince Arnotts to produce 'Kosher' - Chalav Akum - chocolate biscuits? Is there really such a shortage in the 100% Kosher version? Rabbi, please visit Glicks, Grandma Moses (all which are under your supervision), Heimishe, Lichtenstein and the others in Melbourne and Sydney and you will be amazed what a range we already have.


Is it really the function of a Chassidic Rav to produce unnecessary and unhealthy products which are not 100% Kosher. After all, it's not as if Arnotts came begging to you for your Hechsher. By all accounts it was the other way around! In fact the front cover of this issue tells us that this Tim Tam 'miracle' was achieved "after a decade of hard work and  persuasion by the Kashrut Authority".
Imagine, wasting a decade for a half-Kosher unhealthy choclate snack!
Having written all this, today I received an email from that great crowd KCA warning us that only the 200gm (net) packets are acceptable (plus another few conditions).

Although the AJN article also mentioned this, my survey shows that very few people (like indeed myself) actually remember seeing these provisions. Thus anyone missing these may be consuming not only Chalav Akum but also tarfus!


I discussed this post over Yom Tov with my rabbi, who told me that though he agrees with my views 100% and encourages me to publish, he, for a number of reasons, could not publicly make these comments. I gently reminded him about לא תגורו מפני איש


I have heard whispers that some in the Kashrut industry are getting worried about items being produced under Rabbi Meir Rabi and his "Kosher veYosher" Kashrut label. This is especially so now that Rabbi Rabi has publicly stated that his supervision aims to cater for those who are not overly stringent in their standards. I realise this may affect both KAs, but I suggest that you let him keep that sector of the Kosher market and you remain faithful to the more demanding standards that most Kashrut organisations worldwide are now seeking and which you often represent here in Australia,


And if that means not seeking out new customers like Tim Tams with its non-Kosher milk, so be it.
PS: I am trying to find the time to post my thoughts about that upstart Kashrut organsation "Kosher veYosher". Maybe in the next few days or weeks.
at 2:35 AM 17 comments: 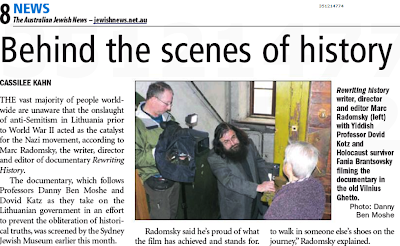