AJN Watch was launched exactly a year ago today and all of us here are pretty chuffed that we are still around 12 months later.

While we realized that our potential audience - frum Jews upset by the AJN’s biased and misleading reporting - was limited, it seems that there is a large measure of interest in the wider community as well. We also know via feedback that our posts have become topics of conversation at many a Shabbos table and in Shuls.

Additionally other posts of interest usually get wider circulation and we notice a spike in the readership. Thus we are BH pleased and capable to carry on in both directions and will, with the help of Hashem, continue in our task.

During the year a number of you have - via private emails - queried how we are travelling and how many “hits” we are getting? 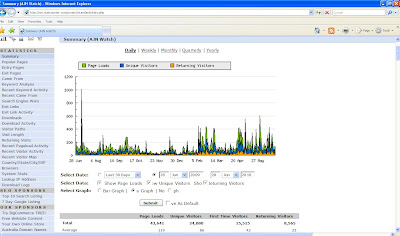 For those who enjoy figures here you have the report from “Statcounter.com” with details for the past year.
Over 40,000 visits and thousands of repeats. Not bad for a bunch of newbies...

The figures seem adequate (at least to us) and even more so as we notice that in the last 3 months numbers they have risen by approximately 50%. 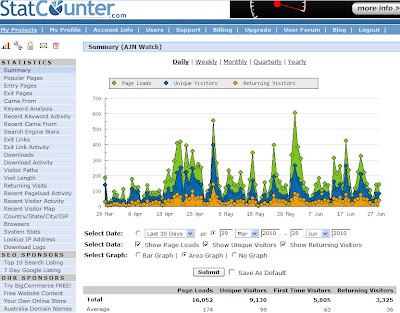 Have we achieved anything? An interesting question.

Probably depends on how you look at things. The AJN is still around – and we of course never expected otherwise.We understand that the Hamodia has swallowed a fair chunk of their readership. (In our view, with some better promotion, the Hamodia with its far superior coverage and content, could do even better.)

The Jewish News still employs that page "number 2" dreckerati reporter Adam Kamien, who, you may remember, in the early days threatened to come after us. (And has been afraid to mention our name since!)

On the other hand, the creation of this blog ensures that there now is a voice for observant Jews who  previously felt degraded and hurt by the reporting style and editorial positions taken by the secular-as-they- come Australian Jewish News.

Readers may have noted that not only Kamien but the AJN itself has banned any mention of our name in both their newspaper and their website. Any reference to AJN Watch in any letter or posted in their comments section is immediately deleted. Despite this many of our posts have been widely distributed by our readers and often forwarded to writers and reporters in the wider Australian and the international Jewish media. No doubt it could be awkward for the AJN – which regularly criticises other media for anti-Israel/anti-Jewish bias - to be shown up as doing the same to Orthodox Jews.

Obviously no reasonable fair-minded person, whether orthodox or not, indeed whether Jewish or not. could fail to be appalled by the “Charged” front page cover about Rabbi Engel of Adelaide. Exposing such iniquitous publishing standards and unconcealed prejudice may hopefully ensure that the publishers will think twice before repeating such blatant intolerant bias.

And of course the delicious upshot of that affair is that the editor responsible for the headline, Ashley Browne has meanwhile been thrown out of his job whilst Rabbi and Mrs Engel have been totally exonerated!
We are optimistic that Browne’s replacement has superior standards to his predecessor.

Our campaign against the AJN’s advertising and publicisingTreif establishments continues and we cannot let go. It is an utter disgrace that a so-called “Jewish” publication blatatnly promotes non-Kosher. The minimum that they must do is to adopt the UK Jewish newspaper system where every advertisement for a caterer or restaurant includes a symbol indicating whether it is Kosher or non-Kosher. Zeddy Lawrence, the current editor, hails from London and should know all about this. It is about time that he introduced at least this minimal change.

We have a lot more to say and no doubt will do so in later posts. Meanwhile “Happy Birthday to us” and we look forward to informing and entertaining you for another year.

Finally a vote of thanks to all who contributed 'guest posts'. These usually generated much comment (and often controversy). Please keep them coming. At the same time we extend an invitation to other budding writers to submit articles of interest.
at 1:37 AM