A reader writes: "The Yiddish language in 2010" 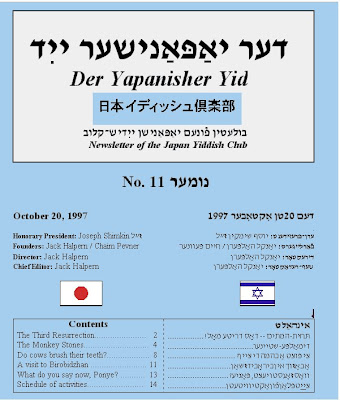 The only Yiddish publication in the Asia-Pacific region?
A reader "Chaverim Kol Yisroel" sent us the following piece as a comment and response to an earlier comment by 'a khaver' . We have asked for and received his permission to use his lengthy 'dissertation' on Yiddish language 'bizman hazeh', which we have no doubt will be of interest to many. 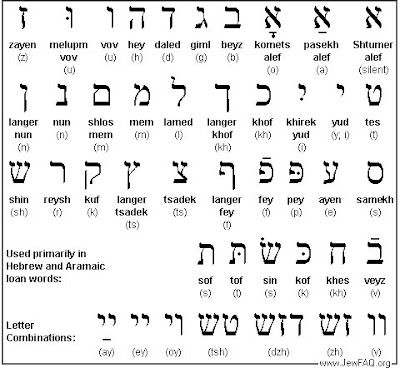 I thank A former Talmid.. for his response.
You ask regarding the Bundistn/Yiddishistn "Are they still around?" . If you really don't know, perhaps that is a marker of how removed you may be from Yidn and Yiddishkaitn other than your own. And if it was a tongue in cheek comment, may I suggest you think about how such a comment would be received by a Bundist or Yiddishist.
But what I really don't understand, is the comment that follows. Frum Jews can't be exposed to other streams of Yiddishkait because they might be led astray? Assuming you include yourself in that group ... how fragile is the strength of your convictions, beliefs, knowledge and values that merely speaking to another Jew may cause you to reconsider your life-long held positions?
And if it did .... I am not clear why that would be a bad thing.
And how do you hope to draw other Jews into frumkait if you don't engage with them? If you don't tell me about your Rosh Yeshivah's visit, how do you expect me to know that I should go? 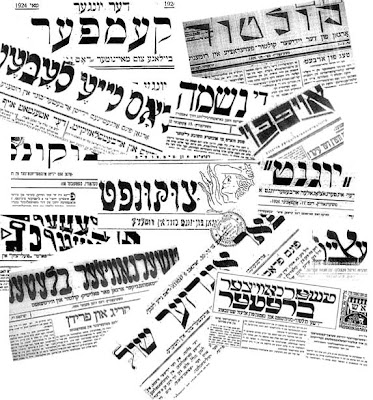 I'll leave the rest of Khaver's issues to others, but will give a general comment as well as explain "baleydikn not baleydign".
Zeit mir moychel khaver, but while you may be correct when using "college" Yiddish, the Yiddish spoken by the vast majority of Yidden these days (and also pre-war in Poylen, Galicia, Hungary and most of Russia) was closer to "baleydign" than “"baleydikn”. Introducing the ‘kuf’ in place of the ‘gimmel’ was invented at some Yiddish conference (Czernowitz?) where they tried to bring some sort of order to our zhargon. But while the secular and haskola media went for those innovations they were hardly accepted by most Yiddish speakers – especially the religious - who didn’t care too much for those resolutions.

A glance at any of the hundreds of (religious) Yiddish publications from those times until today will confirm that most ‘Yiddishistish’ ideas were ignored. After all, “MIr zenen Yidden un nisht YIddishisten". (And of course Yiddish books printed earlier had no ordered style or grammar – each area had their own dialect and spelling.)

As to “DIKH not DIR”, you may or may not be correct - but that is how it is spoken by most Yiddish speakers these days.

And while I truly have rachmones on you and the reshtlech ibergeblibene Bundisten trying to save that beached and dying whale, I think it’s too late. "Toyteh bankes" is how your zeide would have described your hopes. (I say this despite my many enjoyable hours arguing and schmoozing with many of Melbourne’s Bundistn and Yiddishestn in the 60s and 70s and from whom I actually learned quite a lot about the history of those movements. They all saw the demise sooner or later.) Melbourne Jewry already has a generation and half of people who have never seen or even heard of “Der Oystralishe Yiddishe Nayes”. (Are you one of those?)

Yes, Yiddish is alive and well - in fact flourishing. But not amongst Bundist comrades and their offspring. I have no idea what remains of this once noisy and reasonably powerful group here in Melbourne? In fact I am unsure what their function is these days. Skif? How many belong there? Or attend their camps? What is the attendance at the annual breakaway memorial gathering for the Warsaw Ghetto uprising – which the farakshen themselves so naarishly and still observe on the secular date. [Even the Israeli govt, selected a Hebrew calendar date - 27th Nissan, (despite being unacceptable to religious Jews – being in the month of Nissan). But not the Bundists, cholileh. Using our ancient and historic calendar would be far too “Jewish”. So they stick to April 19th – which seems to please the “Khaverim” and no one else.]

So vos iz gebliben fun zei?? And what about the future? Is there anyone who really cares? And what percentage of the einiklech Melbourne’s many original Bund families have any connection to Judaism? (I mean those who did not meanwhile become Chabadniks or other brands of baalei teshuva?) And have you any idea on how many have married out? (In that figure please include those with spouses “converted” via the Temple).
Pretty sad when one thinks about this. Those post war stalwarts deluded themselves into thinking that their children and grandchildren will continue in their unique or peculiar style of Yiddishkeit with the Bund having a real future. Nebach.

And if one looks at the situation in the US you find Arbeiter Ring/Bund type groups where the best they seem to achieve is to get a few dozen kids into TAFE-style courses taught by the few remaining Yiddish ‘scholars’ studying Yiddish some lost indigenous language.
Their famous newspaper – the Forverts – which was published daily for around a century - including of course Shabbos and Yom Tov - has long ago died and revived as an English language weekly (actually quite a good read). Admittedly the owners – reputed to have millions of dollars in the bank after selling off their valuable radio license, also publish a weekly Yiddish tabloid which has hardly any circulation at all. Most of their staff are late arrivals from the former Soviet Union - as are the majority of its readers. Even that infinitesimal readership is expected to dry up in the next 10-20 years.

On the other hand, in frum Jewish kehillos worldwide the Yiddish language (takeh, not the ‘faultless’ Czernowitz-nusach) is alive and well and growing in leaps and bounds.

In New York alone there are over a dozen weekly newspapers (paid and freebies) with a number of them running to 100-120 pages and to over 200 pages before the yomtovim. Yiddish CDs for children and adults are being issued every few days. Seforim in Yiddish abound. Yiddish news services via telephone (Chasidim usually don’t have radios) compete with each other both in Israel and New York. Similarly new email newsletters reporting on general and Jewish news worldwide are being launched all the time.

Thus Yiddish is Boruch Hashem alive and well. It just depends where you look.
Sorry about the rant but it was a good opportunity to get all this off my chest and also to pass on to a wider audience what I have gathered in the past few years. I seem to find that there is great interest in the Yiddish language - both by those who can and do speak it and those who don’t.

It always amazes me when reading how the AJN makes a big deal of some tiny local “achievement” re the Yiddish language - either at the Sholem school or at some course at Monash - which would be lucky to attract half a dozen students. At the same time it totally ignores the evenys and places where Yiddish really lives on, ie, the Charedi and Chassidish community. Eg, Yeshiva, Adass, somewhat less in Beth Hatalmud, Ger shteebel. Boys and lately even the girls going through the Adass school system can talk, read and write quite a passable Yiddish. In the Yeshiva there are boys who can read and give over the rebbe’s talks in Yiddish.
As to Sholem Aleichem graduates, I find that most seem to struggle to put together a complete sentence by the time they reach 20, as they have no one and nowhere to practice what they had been taught. Even the presenters on ethnic radio speak a forced and stilted Yiddish which often hurts my ears.

That’ll do me for now…

Meanwhile I looked up the ’original’ (dos haist the German) for ‘insult’ and it clearly says:

Beleidigung ; insult;
beleidigen; to insult
beleidigt; insulted
beleidigte; insulted
Niemand beleidigt ungestraft meine Schwester. Nobody insults my sister and gets away with it!
Du beleidigst meine Intelligenz! [humor.] You insult my intelligence!