Report: Charges against Rabbi Engel may be dropped 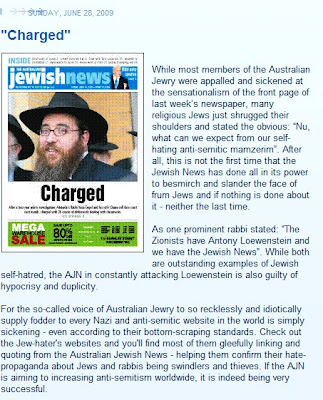 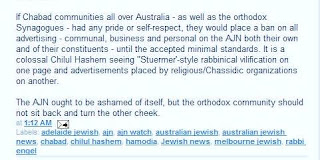 Those AJNWatch readers who have been with us right from the beginning may remember that the main impetus for the creation of this blog was the AJN’s despicable full front page ‘Wanted by Police”-style “Charged" front cover portraying Adelaide's Rabbi Engel.
No less disturbing to us, by the way, was the total non-reaction of Australia's rabbis to the public mugging of one of their own.

But while the Rabbi Engel’s colleagues didn’t seem to show too much concern, a number of laymen from several Melbourne communities DID care enough to establish this blog thus ensuring that the community had a mouthpiece through which to respond quickly and vigorously to the attacks, prejudices and misrepresentation by the Jewish News.

While the situation is nowhere near to perfect yet, we (together with many AJN readers) were pleased when the editor of that time Ashley Browne was giving the boot. Though we would be proud to declare that his sacking was in some way swayed by AJNWatch’s criticism, not having inside knowledge, we cannot honestly make this claim. But whatever, at least Browne is now off the scene. We can only hope that the cleansing procedure at the AJN continues.

All this is by way of a foreword to today’s article in Adelaide’s Independent Weekly stating that all charges against Rabbi and Mrs Engel may shortly be dropped. Should this indeed happen, the least that the AJN should do is a public apology to the rabbi and his wife for their appalling reporting style of their case. 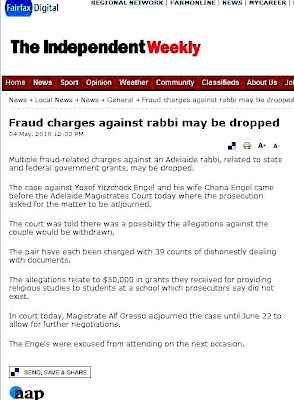