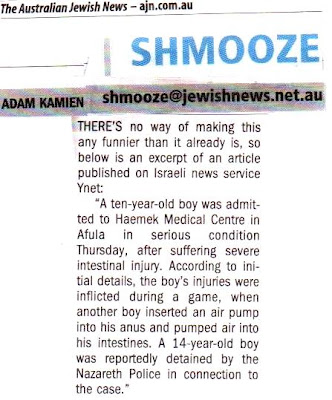 He laughs his head off at the poor child's pain and humiliation ("can't get funnier").

Here's some more on the story from the Ynet site:

A ten-year-old boy was admitted to Haemek Medical Center in Afula in serious condition Thursday, after suffering severe intestinal injury. The injured boy underwent emergency exploratory surgery, meant to ascertain the extent of the damage caused to his intestinal track.
The event unfolded around 6pm, when Magen David Adom emergency services paramedics from the Gilboa Station were called to the scene. They found the 10-year-old writhing in pain with his abdomen severely swollen and rushed him to Haemek Hospital.
Dr. Alon Erez, Haemek's deputy chief of staff, told Ynet that the boy was found to be suffering from extensive intestinal tearing.

Just imagine the outrage had this sickening piece appeared in the Age or Herald-Sun.

With such sensitivity and compassion Kamien demonstrates that he the lead runner to become the next editor of the AJN and/or to partner Kyle Sandilands on his radio show.