Anyone reading this week's edition of the AJN will be wondering if he/she didn't mistakenly pick up a copy of the "Australian Gayish News". Why?

Because there are no less than 9 items(!) about the AJN’s current sweethearts – the homosexuals (or to use the full label - “Lesbian, Gay, Bisexual and Transvestites”).

Yes – 9, including the ENTIRE front page, an editorial (where naturally blame for the killings in Tel Aviv is insinuated upon the ‘ultra-orthodox’)... 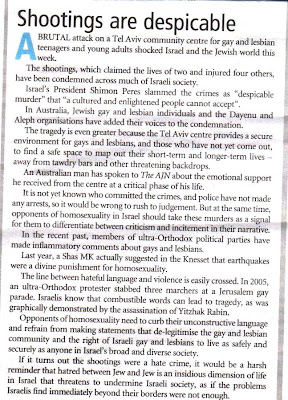 ...a couple of repeat letters from the usual Torah-hating, gay-loving, single-issue-obsessed letter-writers (see top right) and of course a Kron cartoon.

Additionally, editor Ashley Browne in his blog uses the gay killings to assail the Hamodia newspaper. (That's the second time in 4 weeks that the Hamodia has been attacked in the AJN. Looks like this upstart weekly a biting deeply into the AJN’s sales and advertising revenue.)

The world according to Hamodia:
no gays, no murder

The shooting attack in a gay community centre in Tel Aviv on Saturday night that killed two people is creating a huge stir in Israel.
This should come as no surprise. Disregarding the Orthodox population, Israel is one of the more gay-friendly countries in the world and you don’t have to spend too much time in the more vibrant sections of Tel Aviv to become aware of a strong and tolerant gay culture.
AJN columnist Haviv Rettig Gur updated his Facebook status yesterday to say that the shooting was “a reminder that when the peace process with the Arabs ends, there are some culture wars to be won inside our country.”
The Israeli media is all over this story - as is the world media - with one notable exception. According to the Jerusalem Post, the Orthodox newspaper Hamodia, has pulled the bedsheet over its head, closed its eyes, blocked its ears and is pretending that the story did not happen.
That’s right. No gays. No murder.
And yes, this is the same newspaper that a section of the Australian Jewish community believes should become our community’s paper of record.

Just like Browne and Bersten, we too have no idea who the TA gays killer is. But there is as much a chance - in fact far greater - that it was another homosexual (jealous lover's tiff, maybe) as it being the work of an 'ultra-orthodox'. But that shouldn't and doesn't hold back Browne from taking an opportunity to smear frum Jews.

And we would advise Ashley to leave the Hamodia alone. They know EXACTLY what they are doing and understand the audience that they are catering to. The last thing their readers are interested in is what is happening in Tel Aviv snakepits of dreck and perversion.

At the time that you struggle to fill a few miserly pages of your paper with anything newsworthy – thus sinking to a new low with 9 items extolling and supporting TA homosexuals, the Hamodia (even the fledgling Australian edition) carries 4 or 5 times as much Israeli, world and Jewish news and features as does the AJN. In fact, the only half-decent reporting one finds in the Jewish News are the articles that you copy and paste from the Jerusalem Post. Sadly for you, even that is a waste of time and newsprint. Anyone who is interested has already read these on the JPost.com website. People no longer wait a week to read your “plagiarism”.

Your comment that “Israel is one of the more gay-friendly countries in the world and you don’t have to spend too much time in the more vibrant sections of Tel Aviv to become aware of a strong and tolerant gay culture” indeed nauseates, depresses and disgusts not only Hamodia readers, but all decent, civilized and moral people - of all religious beliefs. Your pride and delight that Israel has become a world-leader in depravity and debasement says much about you and your publication.

As for Ian Bersten's repetitive attacks on the Torah and his predictable idiotic comments again proves that this man is a total ignoramus as well as an apikorus (if an ignoramus can qualify for this title.)
at 12:56 PM