Shmuley Boteach: Not enough space between the 'eyes'... 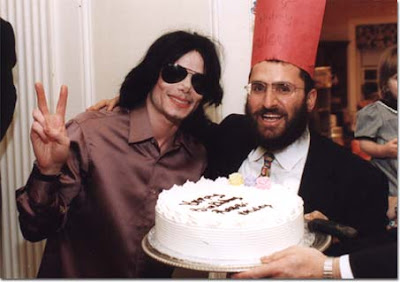 The ‘Hesped’ on Michael Jackson by Shmuley Boteach [AJN 3/7/09 http://tinyurl.com/mbofub ] probably says as much about Boteach and his family as it does about Jackson.

Rather than being embarrassed by his close relationship with this notorious weirdo, menuval and alleged paedophile, Boteach tells us that his daughter burst into tears when learning of Jackson’s demise.

How can a so-called ‘orthodox’ rabbi and indeed one that calls himself a Lubavitch chosid, allow his children to be exposed this bizarre and creepy individual whose live-in partner was an ape?

Is Boteach proud of the fact that his friend’s friend was a chimpanzee?

The question many ask is - is there truly no level that Boteach won’t sink to for the sake of publicity and self-promotion?

Talking of self-promotion, perceptive AJN readers would have become aware of Boteach's serious blemish, ie, not having enough space between his eyes. Or rather –“I”s.
Yep. No less than 21 times does Rabbi Shmuley use the word “I” in that short obituary of his mate. One could be forgiven for thinking that he was actually eulogising himself…

*****
A quick Google search also brought up the following – which require no commentary.

NEW YORK (AP) - When Rabbi Shmuley Boteach brought his children to play with Michael Jackson's kids at Neverland Ranch some eight years ago, the rabbi's youngsters naturally made a beeline for the fabulous rides - the Ferris wheel, the roller coaster, the bumper cars. But when Jackson's own kids asked to go on the rides, he gently reminded them of the family rules, according to Boteach: The rides were only for birthdays or special occasions.

"He was very concerned that the kids grow up with the right values," says Boteach, Jackson's former friend and spiritual adviser…

"To the extent that Michael Jackson's kids COULD have a normal life, he wanted them to have it," says Boteach, who eventually fell out with Jackson.

"Listen, I'm not here to whitewash the sins of Michael Jackson - he was accused of some abominable things," says the rabbi, referring to the pop star's trial and acquittal on molestation charges. "But when it came to being a father, there was much to admire."
…Of course, even Jackson's closest friends are at a loss to explain what for many is the single most memorable image of Jackson as a father: the shocking moment when he dangled Blanket, then an infant, over a hotel balcony in Berlin, showing the baby off to fans with a delighted grin. "What made that incident so inexplicable was that he was an OVER-protective father," Boteach says. http://wtop.com/?nid=114&sid=1710445

"They're like leeches....the Jews do it on purpose..." Recorded phone message from Jackson, 2005

These quotations, coupled with the report from Panorama magazine that Jackson had followed the lead of his brother Jermaine and converted to Islam, would seem to indicate that the late singer was essentially hostile to Jews and Judaism.

Yet, equally credible reports indicate that he was a frequent Sabbath guest at the home of Rabbi Shmuley Boteach, who toured with Michael Jackson in 1999 and brought him along to the Carlebach Shul in Manhattan that year.

I do not understand the connection between the two men, who had very different outlooks.
Perhaps Jackson then felt a need for a rabbi in his life, and Boteach felt the need for a rich homosexual pedophile in his. Go figure!

Most bizarre of the connections between Michael Jackson and the Jewish people is that his second wife Debbie Jean Rowe (Mrs Jackson 1996-1999), the mother of his two older children (Michael Joseph and Paris Michael Katharine), is Jewish! According to Jewish law, the children are Jewish too, although they may not know it. http://glazerbeam.blogspot.com/2009/07/michaels-messages.html