The Jewish News hits back hard! 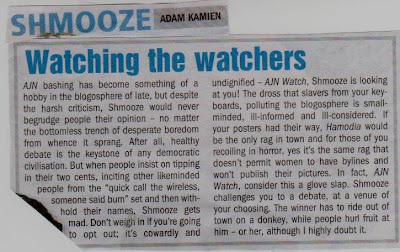 Well, well, well, who would’ve thunk it? The Jewish News trotting out its heavy artillery to repel AJN Watch. Yes folks, Captain Adam Kamien and his S.S. SHMOOZE have been engaged to avenge the honour of his employer! So critical is this assignment, that Shmooze has reduced its usual piffle about Borat, Bruno and the rest of the dreckerati to focus efforts on abusing, accusing and slurring AJN Watch. And he has done it - in his sneering best.

Poor little Adam complains about the “bottomless trench of desperate boredom” behind “AJN bashing” on the blogosphere. And he kvetches about this blog’s anonymity. What a hypocrite! A quick check will show that all comments on the AJN website are anonymous.

But the REAL chutzpah is that the Shmooze column - which is obviously cobbled together by some underemployed cut-and-paster - in most week’s editions doesn’t disclose who that nebech is. Yep., anonymous! (And quite understandable too. After all, why would any self-respecting journalist want his/her name associated with such drivel?)

But seriously Adam, rather than throwing a childish tantrum, why not attempt to respond to the issues raised by this blog? Several charges and serious grievances have been made against the tabloid that you so smugly defend. Why not address these rather than roll out a Thesaurus-like list of every spiteful word you can think of? It’s time to grow up and learn to write like a mentch. Then, and only then, will AJN Watch consider any ‘challenge’ of yours.

PS. Your comment that AJN Watch is “undignified” was real cute. A real pity that we missed an opportunity to ‘dignify’ ourselves by adopting some of your illustrious prose. Eg, ”…dross that slavers from your keyboards, polluting the blogosphere …”

PPS. Your comment: “If your posters had it their way, Hamodia would be the only rag in town” implies that the AJN is the other ‘rag in town’. Mr Zablud, no doubt, will thank you for the compliment.

And whilst it is not our job to defend the Hamodia (this blog, BTW, has no connections with the publishers), before you try to disparage them you may be interested to learn that the Hamodia outstrips the Jewish News in almost every sphere. Hamodia offers dozens of pages of Israeli, world and Jewish news, well-written and interesting feature articles, women’s and children’s sections - as well as items of local interest. That compares pretty well to the AJN’s 2 or 3 pages of cut-and-and paste material from the Jerusalem Post website and a few media releases supplied to it by local organisations. (If the AJN ever ran an honest poll of its readership it would confirm that the main reason of those who still buy it, are the births, marriages and death notices. (No doubt, if they could introduce divorce notices, circulation figures would rise.) The only other worthwhile reading in that paper is the ‘letters page’ - which is supplied by readers and not by paid staff.

The AJN can only dream of having the kind of readership and influence that the Hamodia has. Here’s some of what Wikipedia has to say:

Hamodia is a Hebrew language daily newspaper, published in Israel. A daily English language edition is also published in the United States and Israel. The U.S. version is the first Haredi Jewish daily newspaper ever published in English in the U.S. It is also the only Orthodox Jewish newspaper published daily in two different country editions.
The weekly edition, in English, is published simultaneously in Jerusalem, London, New York and Melbourne. Recently a French weekly version has been introduced and enjoys a wide circulation both in the French speaking community in Israel and in France itself.