If anyone thought that the Jewish News couldn't sink lower than the smutty scribbling of their dreckerati recorder Adam Kamien, (read here, here, here and here) they were in for a real shock when replacement - Bob Meiser - made his appearance last week.
The stench from the unadulterated filth in the page 2 "Shmooze" sewer (which should be renamed "Shmootz") was even worse than the usual pong we have been putting up with. Being that the manure being flung at us weekly is"Jewish" - this cr-p qualifies for a place of 'honour' of the newspaper. Yes, Meiser has quickly proven that he is no slouch when filling in for 'Bilaam's donkey'. 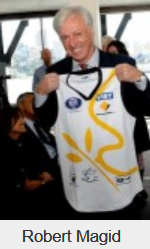 However, what, we ask, was editor Zeddy Lawrence thinking? And more so, the publisher, Robert Magid? Have they lost their marbles? Does Magid really want the world to think that he has no values or shame? Are both these men happy to be purveyors of 'snigger-snigger smut' to the community?
We previously posted about the AJN advertising porn on their website. Obviously they continue to wallow in filth.
While many observant Jews don't allow the rag into their homes for such and similar reasons, there are others who do. Why do they (as well as non-religious/secular readers with any sense of decency) accept being offended time and again when reading such muck at their Friday night dinner tables?
We all know that porn sells. And if Magid and Lawrence are into smut-peddling, it's none of our business. But why "Jewish" porn? Go into the bigger and more lucrative general market and take your well- deserved place amongst hard and soft pornographers. Why the hell must you associate your schweinerei with the Jewish community?
Seriously Mr Magid, aren't you embarrassed before your own family and Jewish cronies? And even more so your associates in the business world? You think that they are impressed when learning that your publication dishes out sniggering toilet-block 'humour' on a weekly scale?
One community leader we discussed this with suggested that maybe Magid will come to his senses if and when he realises that the outside world - especially the media - get wind of the kind of material being featured in his plaything.
We forward his suggestion to our readers. Please go ahead and cut, paste and email this post to all journalists, media representatives etc that you have on your email address list. And if you know of any business associates of Magid, let them read this as well.
Additionally everyone should forward this to rabbis, Shuls, and organisations. Remember, if it upsets you (and we know of many such people), it isn't good enough to kvetch and sigh. Do something about it!
Talking of which,why DO rabbis and orthodox Shuls and indeed all respectable organisations - religious or not - suffer in silence whilst pained by these depravities? Can anyone imagine the reaction if a Christian or Muslim publication - religious in nature or not - allowed the kind of cr-p that Adam Kamien and now his understudy slop out regularly? It is the sacred duty of the spiritual and lay-leadership - and more so organisations like the RCV, ORA, COSV, COSA etc to be expressing their concerns about such matters. They have far more influence and power than has this humble blog. We hear that some weeks ago, Robert Magid had a meeting with Sydney rabbis to resolve a number of issues that had been upsetting them. Why didn't they take the opportunity to express their objections to the appalling and offensive standards of sections of the paper?
Can anyone imaginesimilar filth being published in the mainstream media? The Age, SMH, Herald-Sun, Daily Telegraph? Of course not! They would never get away with treating their readers with the contempt and arrogance that we get from the Jewish News. Even the secular London Jewish Chronicle or the New York Jewish Week, would never sink to such lows. It is only here in Australia that we endure below-zero standards of the Jewish weekly.
Maybe it is time to launch a "Hasbara" campaign towards the AJN's major advertisers - Jewish and non-Jewish - suggesting that they refrain from spending their dollars with this rag until it cleans up its act. Once advertisers realise how much the Jewish News is upsetting large sectors of the community, they may decide that their money could be better utilised.
Such campaigns have worked very successfully elsewhere (most recently the Kyle Sandilands affair) and there is no reason why it wouldn't work here.
Shame on you Robert Magid for lowering AJN standards beyond anything that your predecessors achieved.
at 3:38 AM