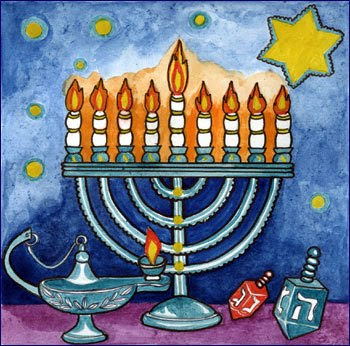 The triumph of Chanukah
by Jeff Jacoby The Boston Globe

BECAUSE CHANUKAH usually occurs in December, it is sometimes thought of as the "Jewish Christmas." It isn't, of course. And yet it is fair to say that the reason for Chanukah's popularity -- especially in America, where it is the most widely observed Jewish holiday after Passover and Yom Kippur -- is precisely its proximity to Christmas.
Chanukah used to be regarded as a minor half-holiday, cheerful but low-key. It has become something bigger and brighter in response to Christmas, which transforms each December into a brilliant winter festival of parties, decorations, and music. Attracted by the joy of the season, not wanting their children to feel left out of all the merriment and gift-giving, American Jews in the 20th century began to make much more of Chanukah than their grandparents ever had. Today Chanukah is well established as part of the annual "holiday season," complete with parties, decorations, and music of its own. Its enhanced status is a tribute both to the assimilating tug of America's majority culture and to the remarkable openness of that culture to Jewish customs and belief.
Ironically, Chanukah was established to commemorate the very opposite of cultural assimilation. It dates back nearly 22 centuries, to the successful Jewish revolt against Antiochus IV, one of the line of Syrian-Greek monarchs who ruled the northern branch of Alexander the Great's collapsed empire. Alexander had been respectful of the Jews' monotheistic religion, but Antiochus was determined to impose Hellenism, with its pagan gods and its cult of the body, throughout his domains. When he met resistance in Judea, he made Judaism illegal.
Sabbath observance, circumcision, and the study of Torah were banned on pain of death. A statue of Zeus was installed in the Temple in Jerusalem, and swine were sacrificed before it. Some Jews embraced the new order and willingly abandoned the God and faith of their ancestors. Those who wouldn't were cruelly punished. Ancient writings tell the story of Hannah and her seven sons, who were captured by Antiochus's troops and commanded to bow to an idol. One by one, each boy refused -- and was tortured to death before his mother's eyes.
The fight to reclaim Jewish religious autonomy began in 167 BCE. In the town of Modi'in, an elderly priest named Mattathias refused a Syrian order to sacrifice to an idol. When an apostate Jew stepped forward to comply, Mattathias killed the man and tore down the altar. Then he and his five sons took to the hills and launched a guerrilla war against the armies of the empire.
When Mattathias died, his third son, Judah Maccabee, took command. He and his band of fighters were impossibly outnumbered, yet they won one miraculous victory after another. In 164 BCE, they recaptured the desecrated Temple, which they cleansed and purified and rededicated to God. On the 25th day of the Jewish month of Kislev, the menorah -- the candelabra symbolizing the divine presence -- was rekindled. For eight days, throngs of Jews celebrated the Temple's restoration. "All the people prostrated themselves," records the book of Maccabees, "worshipping and praising Heaven that their cause had prospered."
In truth, though, their cause hadn't prospered -- not yet. The fighting went on for years. It was not until 142 BCE -- more than two decades later -- that the Jews finally regained control of their land. Geopolitically, that was the moment of real triumph.
But Chanukah isn't about political power. It isn't about military victory. It isn't even about freedom of worship, notwithstanding the fact that the revolt of the Maccabees marks the first time in history that a people rose up to fight religious persecution.
What Chanukah commemorates at heart is the Jewish yearning for God, for the concentrated holiness of the Temple and its service. The defeat of the Syrian-Greeks was a wonder, but the spiritual climax of the Maccabees' rebellion occurred when the menorah was rekindled and God's presence among His people could be felt once again.
Chanukah is the only Jewish holiday not found in the Hebrew Bible and the only one rooted in a military campaign. And yet its focus is almost entirely spiritual, not physical. For example, there is no feast associated with Chanukah, the way there is with Passover and Purim, the two other Jewish festivals of deliverance. Its religious observance is concentrated on flame, nothing more. And the menorah's lights may only be gazed at; it is forbidden to use them for any physical purpose -- not even to read by.
The lack of a physical side to Chanukah is unusual but appropriate. For the Maccabees' war against the Hellenists was ultimately a war against a worldview that elevated the physical above all, that venerated beauty, not holiness; the body, not the soul. The Jews fought to preserve a different view of the world -- one with God, not man, at its center.
Had they failed, Judaism would have died. Because they triumphed, the Jewish religion survived. And from it, two centuries later, Christianity was born.
(Jeff Jacoby is a columnist for The Boston Globe.)
at 2:06 AM