How will our kids afford a home?

Posted by a very concerned parent: 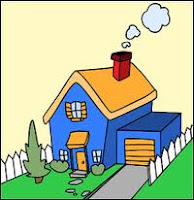 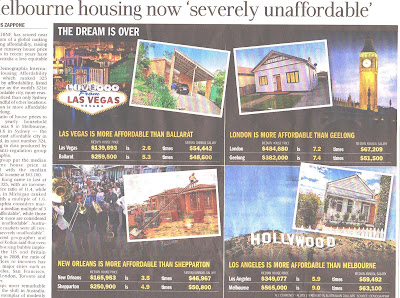 The price of housing in both Melbourne and Sydney is totally out of hand and getting worse by the week. How will our children ever be able to afford even the most basic accommodation? Here's an article published in yesterday's Age:

Update The Demographia International Housing Affordability Survey, which ranked 325 markets by affordability, listed Melbourne as the world's 321st most affordable city, more reasonably priced than only Sydney and a handful of other locations.

London is more affordable than Geelong.
The ratio of house prices to median yearly household income was 9 in Melbourne, versus 9.6 in Sydney - the second least affordable city in the world, in spot number 324, according to data produced by the US-New Zealand anti-regulation group Demographia in a survey of six English-speaking nations and Hong Kong.

The group put the median Melbourne house price at $565,000 with the median household income at $63,100. Hong Kong came in last at number 325, with an income-house price ratio of 11.4, while Saginaw, in Michigan ranked No. 1, with a multiple of 1.6. Demographia considers markets with a median multiple of 3 or less "affordable", while those with 5.1 or more are considered "severely unaffordable". Australia's major markets were all considered "severely unaffordable''.

US-based geographer and author Joel Kotkin said that even after the housing bubble implosion in the US and Britain beginning in 2008, the ratio of home prices to incomes has grown in major cities such as Los Angeles, San Francisco, Boston, London, Toronto and Vancouver. "Perhaps most remarkable has been the shift in Australia, once the exemplar of modestly priced, high-quality, middle-class housing, to now the most unaffordable housing market in the English-speaking world," he said. "The real issue is affordability and Australia has gone from a middle-class paradise in that regard into a more stratified society - just as we find in Britain and parts of the US." SNIPPED
House prices plateaued in mid-2010, amid interest rate rises and a weaker pace of sales. The national city dwelling price fell 0.2 per cent in November, to $466,000, according to RP Data-Rismark information. Six in 10 Australians live in major cities. The third quarter 2010 rankings were compiled from national housing reports and estimates drawn from census data on incomes, with calculations made in local currency.

Swelling cities
Separately, a report from the Department of Immigration and Citizenship calculates that if 260,000 migrants come to Australia per year, both Sydney and Melbourne will need to expand by 430,000 hectares, or 4300 kilometers by 2060. “Expansion of urban areas raises issues such as likely increases in traffic congestion, city (air) pollution, and competition for land as a resource,” the report concluded. “The latter is an important issue since peripheral land of a number of capital cities has been relatively productive agriculture land, which can supply fresh food to the local area with lower freight requirements.”

The report on the physical impact of immigration was prepared by Flinders University and the Commonwealth Scientific and Industrial Research Organisation Sustainable Ecosystems Department of Immigration and Citizenship.

'Severely unaffordable'
The Demographia report showed Australian cities shared the mantle of “severely unaffordable” with American, Canadian, British and New Zealand cities. Demographia listed Melbourne as the world's 321st most affordable city, more reasonably priced than only Sydney, which came in at 325th, and a handful of other locations. The survey found that the ratio of house prices to median annual household income was 9.6 in Sydney. It put the median house price at $634,300 and median income $66,200.SNIPPED
Sydney-based real estate research and investment group Rismark believes Australian homes will become more affordable through 2011, as incomes remain strong and house prices flatten out. "As Australia's business investment and export boom drives strong household income growth at the same time as interest rates keep dwelling prices in check, we are likely to see a substantial improvement in residential real estate valuations," said Rismark joint managing director Christopher Joye. SNIPPED

If the situation is so dire for the general popluation, al achas kamoh vekamoh for obersernant Jews who are so severely limited to where they can live?

Whatever happened to the much ballyhooed plans for a “shtetel” in Melton and/or Caroline Springs - which the AJN reported on some time ago? And what about all those Adassniks who were considering a move to Frankston? (Actually we hear that a number [of non-Adassniks] have already moved there or are in the process of doing so.)

And what happened to that magnificent initiative of the late Mr Izzy Herzog ע''ה to construct affordable apartments on the corner of Hotham Street and Glen Eira Road? That large piece of land still looks like a moonscape with nary a hut on it. Mr Herzog’s idea of building 20-25 flats there - exclusively to local frum families - would make a sizeable dent in the demand – at least for a while.

AJN Watch considers rocketing home prices as one of the most serious issues facing our community, one that needs to be taken up immediately by the Shuls and organisations. We cannot continue to tolerate a situation where families with 5 - and even more - children are cramped into 2 bedroom flats. And even these do not come cheap. Weekly rental of over $400 is quite common. And if you want to buy one, have over $400,000 ready.

It’s over to you - the leaders of  Melbourne and Sydney Kehillos. For the sake of your and our children and grandchildren. 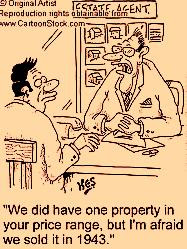