Where are the Chabad rabbis?

The youngsters in our midst (and by that I mean anyone under 40-45) would hardly remember or maybe even know of the "world war" that the Rebbe waged against the various governments of Israel - demanding that they put into place legislation which ensured "Giyur keHalacha", ie, that all conversions recognised by the Rabbanut and therefore the state must be according to the dinim of the Shulchan Aruch.

It would be well worthwhile for those "youngsters" to do some research to learn how our holy rebbe shook heaven and earth to try and force the Israeli politicians to introduce this.

Sadly he failed, resulting in – amongst other scandals - the assimilation of half a million goyim from the former Soviet Union who are today recognized as Jewish citizens of Israel.

The Israeli government has recently passed laws approving 'quickie' conversions to be performed by the Army rabbinate in a manner which is not acceptable as Halachic to the rest of the Rabbinate in Israel.

The leading Torah sages there have issued proclamations attacking this new move and no doubt we will be hearing much more about this in the coming days. 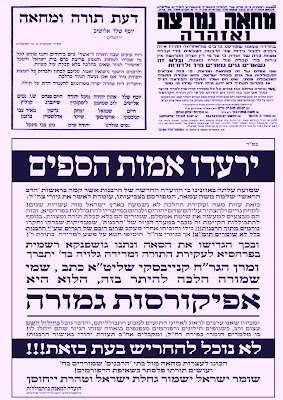 I am however puzzled about the absence of similar denunciations by the Chabad rabbis both in Israel and the Diaspora. They know as well as I do how close this issue was to the Rebbe's heart.

Shouldn't they be in the forefront of this latest campaign?

Yelamdenu Raboseinu, why are you quiet? Why aren't you involved in the holy battle for the integrity of our Torah and the honor of our Rebbe?

As I recall, last time, it was Reb Arel S. leading the troops here in Melbourne - gathering hundreds of signatures demanding Giyur keHalacha. Maybe it's time for a repeat performance?

PS. On a number of local blogs there has been - for the past weeks - debate and argument about who is and who isn't a "Shliach" and a "Head Shliach". My view is that anyone who doesn't publicly support, shturem and undertake Peulos for the Rebbe's inyonim has no right to make any claim for that title.
at 3:16 AM