A Current Affair stirs up the St Ives Eruv controversy - an absolute disgrace!

The AJN article about anti-semitic comments posted on the ACA website after it published a story about the St Ives Eruv plans:

CHANNEL Nine and its program A Current Affair (ACA) allowed anti-Semitic comments to be published on its website, violating racial vilification laws according to NSW Jewish Board of Deputies CEO Vic Alhadeff.

ACA reported last Wednesday evening on plans for an eruv in the Sydney suburb of St Ives. After the show, it posted a video of the story on its website, which attracted hundreds of comments.

The discussion, which was about whether or not Ku-ring-gai Council should approve an application to erect 27 poles that would allow the Northern Eruv Committee to create the religious boundary in the North Shore suburb, soon descended into an attack on Israel and the Jewish community.

“The bosh (Germans) didn’t finish the job.” said one post. Another went further: “Quick, hide your babies. the Jews are going to drain their blood to bake bread!”

Alhadeff contacted Channel Nine to alert them to the possible breach of law and the network immediately removed all comments.
“The quick response was appreciated, but the incident draws attention yet again to the need for all media to implement effective filtering systems of what is posted on their sites,” Alhadeff said. “Some of the remarks clearly violated the race vilification laws, and it is unacceptable for media to carry such slurs until such as time as the offensiveness is drawn to their attention.”

B’nai B’rith Anti-Defamation Commission executive director Deborah Stone said it is not the community’s job to monitor news sites. She added it was particularly concerning that the report prompted virulent anti-Semitism.

An application by the Northern Eruv Committee to erect additional poles for an eruv was first submitted to Ku-ring-gai Council in 2006. It was withdrawn because council said there was a lack of information. A further application was lodged recently, with a decision regarding the erection of the 27 poles expected by the end of August. Around 100 objections against the eruv were sent to the council.

Jonathan O’Dea, who represents the local electorate of Davidson, said there needs to be a rational debate over the feasibility of an eruv in the area. “Prejudice or discrimination based on racial or religious grounds should play no role in the debate,” the NSW politician said.

Meanwhile, the federal member for Bradfield, Paul Fletcher, whose electorate would contain part of the eruv, called the anti-Semitic comments disturbing. “There is no place in this decision-smaking process for offensive anti-Semitic sentiment,” Fletcher said. 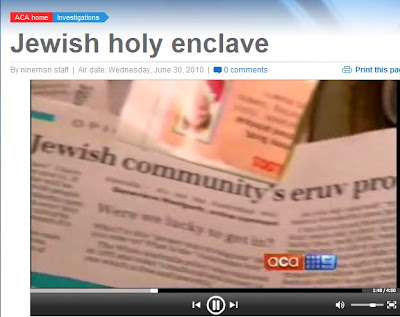 View clip here
In our view the various communal organizations should also have turned their attention to ACA reporting standards. Not only did the reporter Damien Murphy grant those uninformed and narrow-minded whingers a free reign, but proved that he too is no less ignorant. (Eg, “On Saturday, the Sabbath, she can’t..do any sort of lifting or picking up a kid..”)
Is it really too much to expect that a journalist from an Australia-wide news program do better than play up to the prejudices of a miniscule mob of intolerant and bored pensioners who obviously need to get themselves a life?
And Murphy’s bizarre attempt at depicting those seeking to erect the Eruv as “extremists” is not only offensive but idiotic. And again clearly shows that he knows absolutely nothing about the topic or indeed the Jewish religion. 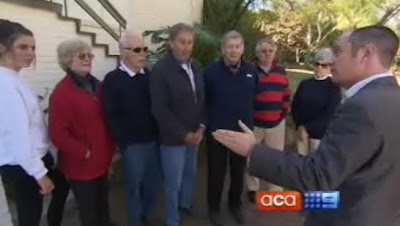 The ACA reporter inciting the mob with:
“Everybody’s against this and everybody’s objecting?”

And receives this nonsensical reply:
"It will be very divisive because we’ll end up with people of the Jewish faith living on one side of the street and everybody else on the rest…” 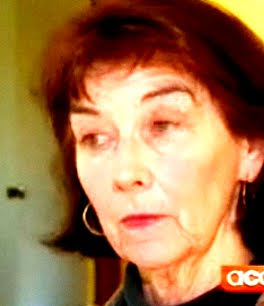 This poor dear is concerned that the Eruv threatens her security and is going to make the entire suburb a target! (After all, it's well known that Eruv's are Al-Quada's No. 1 priority.)
Listen to her:“It’s been the root of so many wars - this Jewish thing.”

Finally, ACA reveals the best kept secret in Australia - the Chassidim of St Ives - with the following depiction that accompanies their Eruv beat-up!