Was it a slip-up or did the AJN censors relent in publishing a letter to the editor mentioning AJN Watch?

Admittedly, the fact that the writer wasn’t exactly praising us may have been part of the decision…
Or has there been a change in guidelines? Whatever the case, we appreciate the publicity. 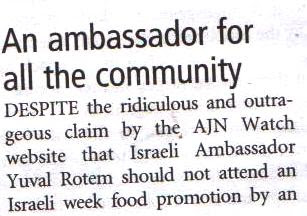 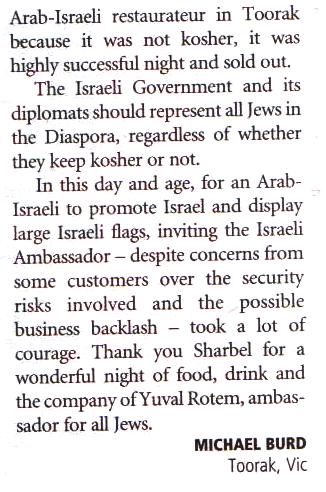 As to the letter itself, Michael Burd misses the point. Like Burd (and indeed the others who made similar comments to our earlier post), AJN Watch is mightily pleased that Israel has an Arab friend. And we too wish Sharbel only the best for the future. However as the restaurant is actually “chazir-treif”, it is NOT a place where any self-respecting Jew should be dining. Even more so, the official representative of the Jewish state may not and should not allow himself to be used as a drawcard for a full house in a non-Kosher locale. If Burd doesn’t understand that, he obviously lacks not only minimal knowledge of our laws and traditions
but also any inkling of sensitivity.

And as mentioned previously, the fact is that Yuval Rotem broke the laws of his country by so publicly attending such a function.

Muslims – diplomats or laymen – don’t arrange functions in pork restaurants and neither should Jews.
at 4:08 PM