The collapse of religious Zionism

Guest post from "3rd generation Melb Mizrachi":
I attach an interesting article from Haaretz, which seems to confirm much of what we have known for the past decade or two - that "religious Zionism", aka Mizrachi, has a very limited future in Israel. Those old enough, can remember the party regularly winning 10-12 seats for the Knesset - election after election. Sadly, this is no longer the case. The old Mafdal has split several ways and/or joined up with other right-wing parties in an attempt to try and maintain some respectable semblance of representation.

At the same time the Hesder Yeshivot seem to be going along fine, though we also sometimes hear about 'leakage' to the Chareidi yeshivot (sometimes encouraged by the Roshei yeshivot themselves!) as indicated in the article.

We in Melbourne can see some mirroring of the situation in Israel, as some of our numbers move "rightwards", eg, towards the Beth Hatalmud and Rabbi Donnebaum's Heichal community. I would appreciate hearing from those in the know - expecially regarding the Sydney situation. 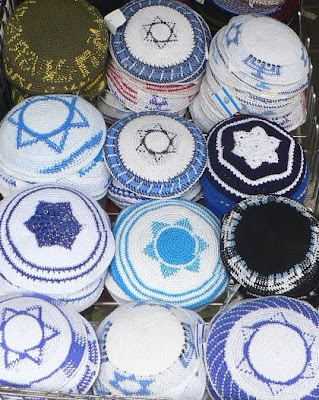 The collapse of religious Zionism By Shahar Ilan

The alliance between secular Israelis and religious Zionists has always been a very important facet of Zionism. But if anything is clear after 62 years of Israel's existence, it is that the term "religious Zionist" is becoming irrelevant. The party that used to represent this public, the National Religious Party, collapsed long ago, and its votes have been scattered between the secular parties and a few religious splinter parties.

A series of incidents over the past year, including the affair of Rabbi Eliezer Melamed and the threat to boycott a march in memory of the Lamed Heh (35 soldiers killed en route to reinforce Gush Etzion during the War of Independence), shows that not only the party, but the public for which it was named, is collapsing.

One fault line within this community is the question of its attitude toward democracy, and toward Zionism as a democratic movement. Some religious Zionists, especially those known as the Zionist ultra-Orthodox, have joined the non-Zionist ultra-Orthodox in refusing to honor governmental decisions.
A prime example is the support for soldiers disobeying orders expressed by Rabbi Melamed, head of the Har Bracha yeshiva.
On the other side, a few religious Zionists have made what for them was the very difficult decision to join with the secular in a desperate effort to defend democracy and Zionism. It was impossible not to notice, for instance, that no real outcry developed over the decision to expel Melamed's yeshiva from the hesder system, which combines Torah study with army service.
The second fault line relates to the cultural aspects of religion: the fact that a portion of the religious Zionist community is distancing itself from modern life and adopting rules of modesty and separation of the sexes that border the extreme demands of the ultra-Orthodox. Thus in January, the Bnei Akiva youth movement threatened to boycott the Lamed Heh memorial march to Gush Etzion because an army troupe comprising both men and women was to perform at the end of the march.
A report published last week by the Taub Center for Social Policy Studies in Israel warned that the growing number of students learning in ultra-Orthodox schools, which do not teach secular subjects, endangers the state's existence. But the religious Zionist community also includes a large segment that has also removed the core curriculum from its schools.

On the other side, it is becoming clear to many moderate members of the religious Zionist community that the main victims of religious coercion are its own women. It is these women, for instance, who have no way to circumvent the rabbinical courts, which discriminate against them.
And the moderates have begun drawing conclusions. In the previous Knesset, the two most prominent fighters against ultra-Orthodox religious coercion were religious Zionist MKs Michael Melchior (Labor) and Menahem Ben-Sasson (Kadima).
In Jerusalem's last municipal election, most of the religious Zionist public joined with the secular public to elect a secular mayor, Nir Barkat.
MORE: http://www.haaretz.com/hasen/spages/1164323.html

Meanwhile AJN Watch has come upon this photograph showing pre-war Polish rabbanim who were members or supporters of the Mizrachi movement. It's hard to imagine that today's RZ's could put together such a Chassidic/Charedi-looking group picture.

We have no idea who these rabbanim are and would appreciate any further information. 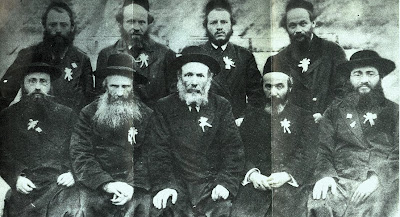