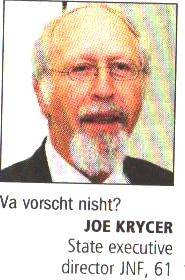 Whether Joe Krycer really said "Va vorscht nisht?" or that is the way the paper's reporter heard it, is irrelevant. It clearly shows that the Yiddish knowledge at the AJN is zero! And that is despite their editorialist trying his best to make use of every cutesy Yiddish word that he has ever heard on American TV shows. 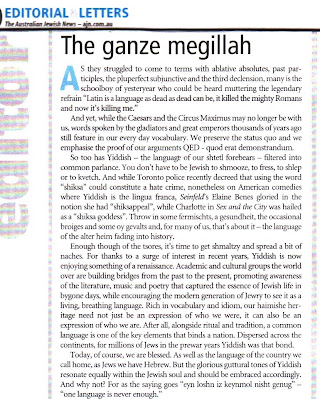 Indeed their entire reportage about Yiddish language locally is completely flawed. Their attempt to fill a few pages by making a desperate big deal about a dozen (or less) Yiddish ‘academic’ students, (whose irritating, unnatural and stultifying dialect usually hurts listeners ears,) is a complete beat-up with the total result showing gornisht mit gornisht.

Had they done even minimal research, the AJN may have discovered that indeed Yiddish is a live day-to-day language in Melbourne amongst many frum Jews. In the Adass there are dozens of families for whom Yiddish is on an equal footing with English (and quite a few where that is actually the first language). Similarly in the Lubavitch community has – especially amongst the “imports” - families where Yiddish is a living language. So too can one find its use in the Ger shteebel, Katanga, Yeshiva and Beth Hatalmud. But then what would the Jewish News know about such places?


The Adass school has since its inception 60 years ago remained faithful to it as the language of instruction - as it was in “der alter heim”. They have produced generations of Yiddish speakers over that time. Also, there are dozens of Yiddish Torah shiurim held in Adass. Not only all speeches but even the selling of aliyos is in Yiddish. But as to be expected, the AJN’s report doesn't have a single word about all that, rather its focus is on the efforts of a few housewives and pensioners who ‘study’ the language for an hour or two a week. 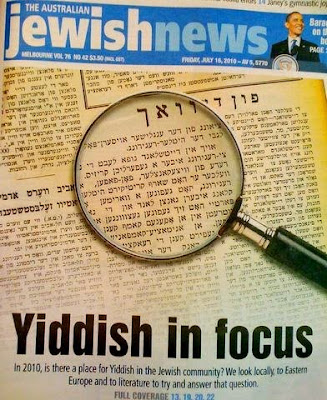