The Alter Rebbe - in wax!


The Rebbe in the Wax Museum 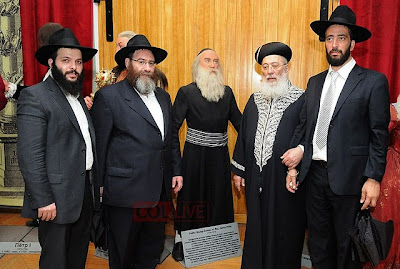 One of the rabbis in this photo is made of wax.

It's actually a photo of Israel's Sephardic Chief Rabbi Shlomo Amar visiting a wax museum in Russia. The waxwork is in the centre: it is the "Alter Rebbe", Rabbi Shneur Zalman of Liadi, the founder and first Rebbe of Chabad and author of the Tanya, Shulchan Aruch HaRav, and Siddur Torah Or.

I thought replicas (statues) were forbidden under Jewish law.Seems like they forgot to tell the local wax museum in St Petersburg Russia.

And from Chabad on line:

Israel's Chief Rabbi Shlomo Amar met with the "founder of Chabad - the Alter Rebbe" last week - or at least his lookalike.

Israel's Sephardic Chief Rabbi Shlomo Amar concluded a visit to the Jewish community in the Russian city of St. Petersburg. He was hosted by Rabbi Mendel Pewsner, the city's Chief Rabbi and Chabad Shliach and Mark Gruberg, chairman of the local community.

The visit was jam-packed, beginning with the first Congress of Rabbis of Russia, a Farbrengen for Tammuz 12 in Cheder Menachem, inagurating a Bukharian shul and welcoming a new Torah to the city's main synagogue.

Amar also took the time to learn about Rabbi Shneur Zalman of Liadi, the founder and first Rebbe of Chabad and author of the Tanya, Shulchan Aruch HaRav, and Siddur Torah Or.

Amar visited Petropavlovski fortress where the Alter Rebbe was imprisoned for 53 days in 1798. He later visited the a local wax museum which includes a wax figure of the Rebbe in a lifelike pose.