The rumour mills are abuzz but AJN Watch has yet to receive credible information on why Gerassi - who was "imported" at no small cost - from South Africa together with his partner, has been given the flick. 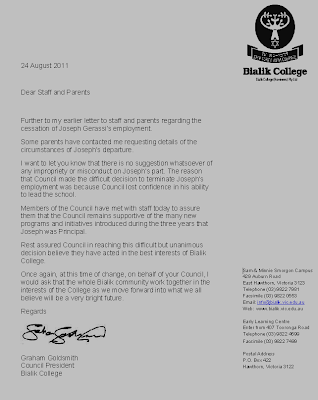 (We invite readers input but remind all that libellous and inappropriate comments will be disallowed.)

BIALIK College’s president Graham Goldsmith kept tight-lipped on the reasons why the school last week sacked principal Joseph Gerassi.
In a move that caught many parents by surprise, Gerassi’s employment with the school was terminated last Wednesday, effective immediately. Long-time Bialik teacher Gary Velleman has been appointed acting principal while the school conducts an international search.
Speaking to The AJN on Wednesday, Gerassi said he been prevented by the school council from telling his side of the story, for now.
With Bialik having finished in the top-10 Victorian schools for VCE in 2010 and with school enrolments at the Hawthorn East school at capacity, the move appears perplexing.
But Goldsmith refused to shed light on the reasons Gerassi was marched out, repeatedly telling The AJN, “it’s not appropriate or fair to go into that sort of detail out of respect for him.
The AJN understands a number of senior teachers at the school had clashes with Gerassi, who moved from Johannesburg’s King David School less than three years ago for the job. It is alleged they confronted the board threatening to resign if changes were not made to the school leadership.
When this version of events was put to Goldsmith, he replied: “I’m not going to go into specific interactions the council had.
He added: “We made a unanimous decision, it wasn’t take lightly.”
Dr Paul Bartrop, a former senior teacher at Bialik who this year took up a position in the United States, confirmed there was discontent.
Speaking from his new home in New Jersey, he said Gerassi’s “leadership style” had alienated some teachers and parents.
“I do not think he had a positive influence on the way Bialik College functioned on a day-to-day level,” Dr Bartrop said.
“The college community can now refocus its attention on the core objectives of teaching and fostering of menschlichkeit [creating good Jews],” he said. “It is unfortunate that the college council was place in such a position that it had to take this stand.”
Goldsmith said a meeting had been organised with parents tonight (Thursday), in the interest of “transparency”, but said reporters would not be welcome to attend.
In a letter sent to Bialik parents last Wednesday, Goldsmith wrote Gerassi had been sacked “because council lost confidence in his ability to lead the school”, however, he added the council continues to support “many new programs and initiatives introduced during the three years that Joseph was principal”.
The school president admitted parents’ reaction had been mixed, but added “With a decision like this, it’s not a sudden or rash decision, this is not something that is taken lightly.”
Gerassi began at the school in 2009, taking over from long-standing Bialik principal Genia Janover after her retirement.  NAOMI LEVIN
What the Bialik students think: 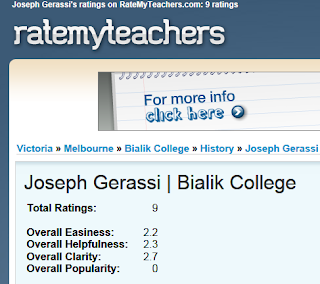