This item in the current edition of the AJN caught our eye. 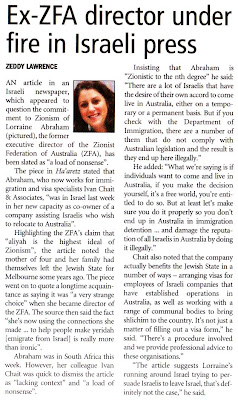 And here is the original Haaretz article that triggered this scandal:

In reverse, ex-Zionist leader helping Israelis go Down Under
By Raphael Ahren - HAARETZ

Months after quitting her post as executive director of the Zionist Federation of Australia, Lorraine Abraham was in Israel last week in her new capacity as co-owner of a company assisting Israelis who wish to relocate to Australia.

"Have you ever thought of working or living in Australia? Now you can," reads an ad in Hebrew which Abraham's company, Ivan Chait & Associates, recently placed in Kav LaMoshav, the national newspaper of Israeli moshavim. "With more than 20 years experience in the field of immigration, we offer a complete immigration package including consultations, preparation of applications for temporary or permanent residence and work permits in Australia."

Abraham, who left her position at the ZFA in April, did not respond to several e-mails asking for comment.

The Melbourne-based ZFA states on its Web site that it officially represents Australian Jewry "in carrying out the goals and Zionism" and that it "aliyah is the highest ideal of Zionism."

ZFA President Philip Chester told Anglo File that Abraham's career choices are her prerogative and that his organization had no further comment. He did say the ad did not encourage people to leave Israel but merely offered assistance to those who had already decided to do so. "Lorraine and her husband are still very committed to Israel," said Chester, who is currently in Israel for his son's bar mitzvah. "I see them all the time and I can assure you that they are not bitter about Israel or Zionism."

Born and raised in South Africa, Abraham and her husband Simmy were staunch Zionists who immigrated in the early 1990s, according to a professional in the immigration field who has known them a long time. The Abrahams lived in Ra'anana, where they had four children and Simmy owned a real estate company. After about 10 years, Simmy sold his business and the family moved to Melbourne.

"Simmy got up one morning and said: I had enough of the fighting, of the pushing around here. I need some quiet," the immigration worker said. "Then Lorraine became the director of the ZFA [in Melbourne], which I thought was a very strange choice, but whatever, she's a Zionist, perhaps she can get some people to move here. But that she's now using the connections she made in Israel and Australia to help people make yeridah [emigrate from Israel], that is really more than ironic."

Lorraine is not the only emigre who served as ZFA executive director. Her predecessor Haya Mond held the post for 15 years, until 2002, after having left Israel. Robbie Franco, the ZFA's current executive director, had made aliyah from South Africa before he moved to New Zealand and then Australia.

"It may look like [the ZFA is] trying to recruit people who have left Israel and that we're trying to make some statement, but that's not the case," Chester asserted, adding that his organization's leaders are simply the best people for the job. "These are all people who still love Israel but for whatever reason their life changed and they made a decision to leave. The truth is: We live in a global village and people move," Chester continued. "The idea of stigmatizing someone because they leave Israel is not really part of the Zionist approach anymore."

And from the Haaretz comments section:
You can be an armchair Zionist and a observant Jew but many English speakers such as Lorraine Abrahams the former Australian Zionist Director who made yerida have the same experience about residing in Israel. Why does not the President of Z.F.A make aliyah instead of a two week junket for his sons bar mitzvah? It's only the heroes and masochists that need to face the oppressive Levantine mentality inherent here.

The Abraham family were among 117 people to become citizens in a ceremony in February 2005. Simon and Lorraine Abraham and their four children moved from Israel to Australia
three years ago because they saw it as a place of opportunity and congenial community life.
“We have family all over the world but chose Australia as our home because of the friendly people and access to public services,” Lorraine said.
“This is our home now and we love living in Glen Eira because of its open space and community feel and our children love the sports that are available to them.”

Reminds us of that well-known statement by David Ben Gurion: "I prefer the Neturei Karta who live in Jerusalem to the Zionists who stay in Los Angeles..."