Should the JCCV be wasting their time on this? 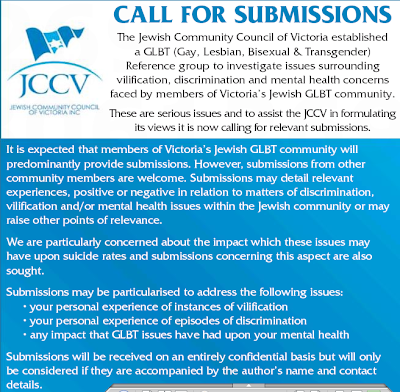 Why is the JCCV using its limited resources for an issue that is more than fully addressed by our local, state and federal governments? After all, concerns and problems that these individuals claim to have are the same for all - whether they are Jewish, Hindu or Rastafarians.
Not that we object to them getting all the help they need. To the contrary, some may even seek and find a ways to drop their abnormal, anti-Torah, queer lifestyle and join the mainstream 'normal' community.

But why is the JCCV straining to seek a 'Jewish angle' on this? Don't they have enough issues to deal with? Have they checked with their membership and the community at large to gauge if this is something wanted by or even acceptable to the majority?

Or has John Searle finally capitulated to that miniscule and insignificant noisy bunch of homosexuals and their ad-nauseum-whimpering. If so, why not go a step further and resign his presidency and hand over the running of the Victorian Jewish community to Michael Barnett.

Such a step may even defer the whimpering for a week or two.

***
To paraphrase an earlier post on an associated matter, maybe the JCCV should call for submissions to investigate discrimination and vilification against members of the following "groups":