Questions asked at the birth of (the now dead) "Chesed Foundation" 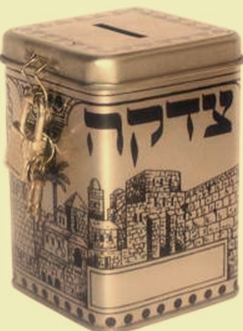 The post by Nosson Titein about the demise of Melbourne's "Chesed Foundation" has created some behind-the-scene comment.

We have received some very interesting emails, been forwarded brochures and links to blogs requesting comments about certain posts that discuss Meshulochim. A number of Sydneysiders have also contributed with their views on that city's "Vaad Tzedaka". We shall be looking at all submissions and may post regarding some of the more important revelations. 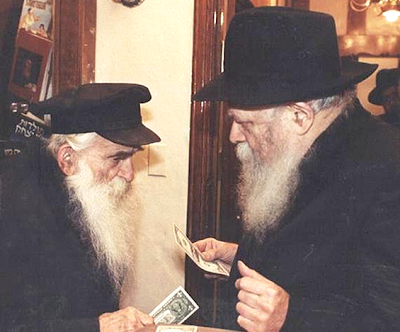 We thank "Angry Baal-Tzedaka" for forwarding a brochure that was going around town at the time of "Chesed"'s creation.
While no longer relevant here, we have decided to publicise parts of that brochure, in case some other "well-meaning" individual will one day in the future get a similar idea into his head. It should also be of interest for AJN Watch readers in other cities where this type of organisation exists.

The brochure also included the following article in the AJN: 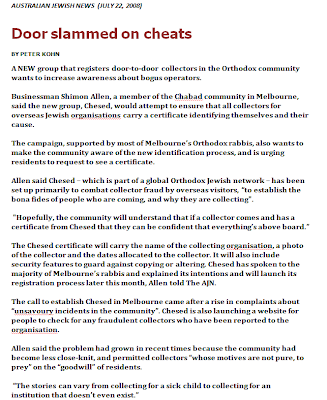 ﻿(Note from AJNWatch: We have not verified the allegations regarding the fees demanded from Meshulochim by the Melbourne and Sydney Tzedaka certifiers nor the amounts that its backers allegedly give.)
We don’t know if the individuals behind the “Chesed Foundation” collectors scrutinizing apparatus understand the words of the above Midrash, but their rabbinical backers certainly do.

The message is clear: !די לו בעניותו LEAVE THE POOR ALONE!! They have enough troubles, tribulations and problems in their lives without a horde of businessmen adding to their load.

We ask the businessmen behind this “Foundation” to reply to the following questions:

1) Who are you exactly? Why do your names not appear on the website?
2) What are your qualifications to approve or reject assistance to needy people arriving at our shores?
3) How much Tzedaka do you personally give (even to your 100% “scrutinized” collectors)?
4) Will you now be giving substantially larger amounts to collectors who present YOUR certificate?
5) Can you deny or confirm that the ‘businessmen’ behind this scheme include those who have mostly have their own doors closed to collectors? And/or that give collectors the grand sum of $5 and sometimes even $3? That another gives collectors the run-around where and when to come (costing them time and money) and if and when finally ‘caught’, gives them a negligible amount – often with a few abuses added?
6) How much extra funding are you guaranteeing to collectors who agree to submit themselves to your meticulous scrutiny? Have you lined up additional donors - seeing that they no longer need have doubts about the integrity of ‘certified’ collectors? Will you assure those collectors, that displaying your ‘certificate’ ensures them of additional funds? (And we don’t mean that Mr $5/$3 will now give them $10.) Or is that beyond the objectives of your “Chesed Foundation”?
7) As you well know, there already is such a “vetter” in Sydney (a member of your alleged “global Orthodox Jewish network”?),who charges Meshulochim $60,for such ‘certificates’. If a collector already has a Sydney certificate, will you still impose upon him to get your $50/100 duplicate?
8) If the answer to #7 is ‘no’, please skip this question. However if it is ‘yes’, why? What makes you a better certifier than Sydney? Why force a decent person, who may have fallen on hard times, to again undergo this degrading and time-wasting process? Don’t you trust your Sydney colleague? Why not? And we have the same question if he has a certificate from an overseas Vaad Tzedaka - from one of your so-called “global Orthodox Jewish network”. Why won’t you accept their assurances re the honesty of the collector? Is the true answer that this exercise has absolutely nothing to do with the bona fides of Meshulochim and everything to do with“Meniyat Tzedaka” (as publicly stated many times by Rav Beck שליט''א)- to reduce the number of people coming to you requesting help?
9) How about collectors who come annually? Will they be compelled to be ‘processed’ year after year? And the representatives of well-known institutions, like Chabad, Ruzin, Viznitz, Karlin, Belz, Toldos Aharon etc? Do they need a new certificate every year? Why?
How about that blind man from Jerusalem who nebach shlepps all the way to the other side of the world to raise funds to marry off his 15 children. Does he too need your annual anction that he is authentic and above board?10) And what about the blatant lie in the above newspaper article, where you claim to be “supported by most of Melbourne’s Orthodox rabbis”!
You actually list a grand total of 11 rabbis! (http://www.chesedfoundation.org.au/) which is less than 25% of the local rabbinate!
Additionally, have you bothered to investigate how many (if any!) members belonging to the shuls of Rabbis Genende, Glassman, M Groner, MZ Gutnick, S Gutnick, Heilbrun, Reisenberg EVER open their doors to a collector? According to our research there are less than 25 ‘givers’ combined!
As for the other signatories, seeing that they and their communities are constantly fundraising themselves, isn’t this a situation of conflict of interests?
And if you and they are going to be so fastidious about Tzedaka money, why shouldn’t their organizations also be investigated to ensure that monies raised are actually used in accordance with donor’s expectations? Why aren't you demanding that there be a public accounting annually? After all, they raise millions of dollars every year, compared to the paltry few thousand that the average collector from Israel can put together.)
11) If you do not wish to partake in the Mitzva of Tzedaka, simply tell the drivers that you are not a giver and not to bring anyone to you. Why incite the entire community against giving Tzedaka by making contemptible claims in the AJN, labeling good, decent - but poor - Jews as ”cheats”, “unsavory” and “frauds”?
Did the rabbis also approve this disgusting rechilut and hotzoat shem ra?)
Are you confident that if an independent auditor went through your business and financials that you’d come out so great?
The AJN article talks about “collectors whose motives are not pure”. What about the creators of the Chesed Foundation? How “pure” are their motives?

Finally, let us repeat the words of Rav Beck shlita during his Shalosh Seudot Torah on Shabbat Parsha Mattot (citing well-known Chassidic sources): “As long one isn’t too exacting about who he gives his Tzedaka to, so too in Heaven they are not overly vigilant when granting this person their blessing. However, if someone is adamant to give charity only to one who is 100% worthy, similarly in Heaven - middah keneged middah - they will scrutinize his adequacy thoroughly to see if he is eligible to qualify for Hashem’s bounty.”

And now a few questions to the honorable Rabbanim:

1) Did you consider all the above points 1-11 before signing?
2) If so, how do YOU answer the above questions?
3) Did you know at the time of signing that HaRav Beck was so firmly opposed to this and despite that gave your approval?
4) Do you know that in most places where there is a Vaad HaTzedaka, it is managed by Rabbanim and not in the hands of a few businessmen?
5) What will YOU do on the POSITIVE side of the ledger for those collectors who do pass muster? Will you speak to your well-off congregants and supporters requesting them to make generous donations? Or are you only supporting this “Chesed” foundation for the NOT giving part?
6) In your letter (published on the website) it states that “even if an institution or individual does receive a certificate of approval, it does NOT mean that in the eyes of the Vaad (Hatzedaka) it/he is worthy of the community’s support”!!!
Can you please clarify? You seem to be saying that despite demanding that these unfortunates (and representatives of prominent Yeshivas/Kollels/ organizations) go through the degradation of being probed and scrutinised by sel-appointed businessmen, you still state: “but we [still] don’t recommend supporting you”.
Or have we misunderstood your words?
7) Will you insist that Rabbanim, Roshei Yeshivot and Rebbes also be certified?
8) Isn’t the role of a Rav to encourage people to give Tzedaka – rather than stopping Jews doing Chesed?
9) And (repeat of above question #9) to our Rabbanim: Do you have ANY IDEA what percentage of YOUR membership gives - if ANYTHING - to collectors?
10) According to our investigations, 35-40% of the funds raised by most collectors are from the Adass community.
Accordingly, shouldn’t you rabbonim consult with the rabbi of that community, before backing such a vetting scheme?

We look forward to hearing the response both of the businessmen and the Rabbanim to all of the above. Meanwhile we strongly urge decent and generous Jews observe the words of the quoted Midrash: “Al Tigzol Dal”. Have no part in adding salt to the wounds of the needy and distressed.