UPDATED
Long-time readers will remember that the straw that broke the camel's back and the catalyst for creation of this blog was the following front page in the AJN: 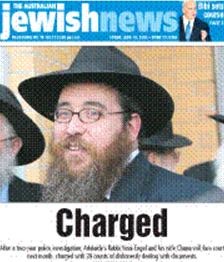 (Although all charges against Rabbi Engel were later dropped, we cannot recall reading an apology from the newspaper for their despicable sensationalist reporting.﻿)
Two years on - nothing has changed. Both editions last week plastered their front pages with an assault on another rabbi - not just any rabbi, but the "top" rabbi - in their estimation. 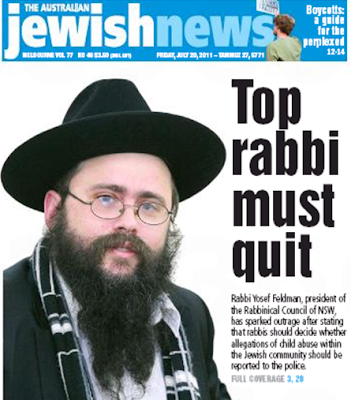 ﻿﻿A Sydney reader has informed us that Rabbi Feldman's lawyers view the Jewish News' reporting as actionable under Australia's libel laws. If indeed so, we look forward to Rabbi Feldman extracting a substantial payout למען ישמעו ויראו.
Maybe Rabbi Engel can also get some advice about the way his case was portrayed.
If anyone can supply the documents and any further details please contact us at ajnwatch@gmail.com
Meanwhile we look forward to Australia's rabbis and rabbinical organisations to offer more support to Rabbi Feldman than they did to Rabbi Engel. After all, who knows who the next קרבן if the Jewish News is?
==
Update:
The Sydney Sunday Sun-Herald has now latched on to this story: 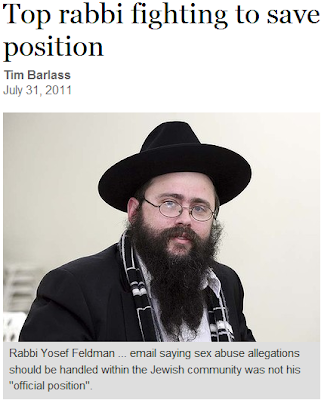 A SENIOR Sydney rabbi is refusing to resign from the state's Jewish religious authority over comments he made suggesting that sexual abuse cases should be handled within the community and not by police, claiming they did not represent his ''official'' view.

Rabbi Yosef Feldman, the president of the Rabbinical Council of NSW, has been under pressure to resign after making the comments in a series of emails to fellow rabbis last week.

Last night, his brother, Rabbi Eli Feldman, said that, while he does not deny sending the emails, which were leaked to The Australian Jewish News, the contents ''do not reflect his official position'' and he ''is a strong advocate of police intervention in cases of paedophilia''.

''He was just conjecturing,'' Rabbi Eli Feldman told The Sun-Herald.

The comments by Rabbi Feldman echo an edict given by Pope John Paul II in the 1980s that reports of sexual abuse by Catholic clergy be handled in Rome by then Cardinal Joseph Ratzinger.

Rabbi Feldman wrote: ''I really don't understand why as soon as something of serious loshon horo [evil talk] is heard about someone of even child molestation should we immediately go to the secular authorities. One must go to a Rov [rabbi] who should firstly investigate the veracity of the complaint and if thought to be serious, warn the culprit etc. and act in a way that could scare him by threatening him with publicity by internet to the whole community.''

He added: ''I personally feel that if we as a Jewish leadership can't deal with this and other issues bifnim [internally] we are showing ourselves to be impotent …''

Rabbi Feldman also suggested that because paedophiles were raped in prison, the people who reported them to the police could be held responsible.

Several rabbis told The Australian Jewish News that Rabbi Feldman's comments did not represent the broader view of the rabbinate and that he should resign from the honorary position.

As of last night, Rabbi Feldman was clinging to his post but a decision had not been made about his future, his brother said.

Rabbi Jeremy Lawrence said that he did not believe there was anyone in his congregation who was sympathetic to the views ascribed to Rabbi Feldman.

He said the rabbi's comments were alien to their understanding of Jewish values and of the responsibility of the rabbinate leadership.

Rabbi Lawrence himself resigned from the council following friction between himself and Rabbi Feldman. Asked if he felt Rabbi Feldman should step down he said that it would remove pressure from other rabbis who felt they were unable to be taken seriously within their communities while the council was enmeshed in controversy.

Rabbi Eli Feldman said his brother was determined to clear his name and that they were considering taking legal action against The Australian Jewish News.
at 1:10 AM