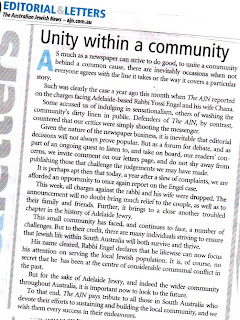 If the editor of the AJN, Zeddy Lawrence, thinks that he has in any way purged his newspaper of the despicable manner in which they reported the Engel affair, he is very much mistaken. This editorial does absolutely nothing towards this and some may say even reinforces the view that the newspaper completely disregards the feelings of religious Jews.

Admittedly Lawrence wasn’t at the helm of the AJN when this outrage occurred. However, upon assuming his position he became responsible for this affair as well. A decently worded apology would not have been out of place as well as a pledge that in future everyone – even rabbis and frum Jews – will be treated in a more humane and mentchlich manner.
at 2:38 PM