Why the silence in the Elwood v. Yesodei dispute? 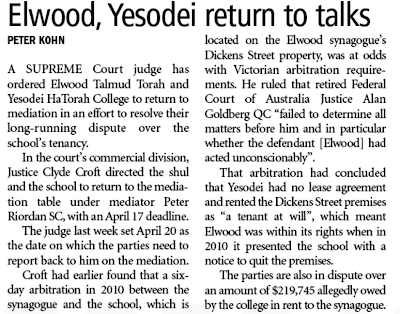 
I am a parent of 2 boys enrolled at the Yesodei Hatorah College in Elwood and am upset at the fact that you haven't thought it important enough to bring to the attention of your readership the appalling situation that our school have been facing due to the unreasonable, irrational  and obstinate attitude of some members on the board of Elwood Shul.


It is no secret that for the past few decades Elwood Shul is in decline. They can rarely put together a Minyan during the week and  despite the efforts of the rabbis is basically an empty shell. The late Rabbi Chaim Gutnick z'l understood this well and sensibly encouraged the board to welcome the Yesodei school into its empty ex-Moriah premises thus returning the sound of Torah and children studying it back to Dickens Street. This brought much Nachas to those who have warm memories of the Elwood Talmud Torah and Moriah College of years gone by. Since Rav Chaim's passing however, a number of those 'in power' seem to have gone to war against this "shidduch". They wish to reverse such a remarkable and rare achievement of 'Techiyas Hameisim' of a local Shul property. Yes, remarkable and rare. Imagine how grateful the people who belong to Shuls like Toorak, Brighton, Moorabbin, East Melb would be if they could host such a vibrant and lively Jewish centre with 100s of kids operating out of their premises 6 days a week? And even being paid for the privilege!


But what is happening in Elwood? The board has spent hundreds of thousands of dollars in legals trying to remove the students and make difficult the continuing Torah and general education of hundreds of Yiddishe kinderlech! How shameful is that?


Why isn't the entire community up in arms? Why are the rabbis silent about this? Indeed, what about Elwood's own rabbis? Shouldn't they be in the front line of battle to save this most important Torah mossad? Wouldn't one expect to see Rabbi Mordechai Gutnick leading the campaign for continuance of one his late father's greatest achievements? (I apologise in advance, if Rabbi Gutnick has been doing so quietly. Though doing so openly would be far more useful and effective.) Hundreds of thousands of dollars are being wasted on legal costs and we don't hear a peep anywhere. Why no in-depth enquiry by the AJN? And aren't the members of Elwood Shul concerned at the waste of so much of their money?  Finally, where are you AJN Watch? Isn't this a topic that you should be headlining?


I agree with your criticism of  Caulfield Shul for its treatment of poor collectors. And I usually agree with your stance on most communal issues. But, why oh why,
have you been silent in this painful and sad case of a few angry old men fighting against
של תינוקות של בית רבן הבל פיהם  .

Why is your voice is not heard at all?
Why?


While we haven't directly addressed this issue, it has been mentioned on this site previously. 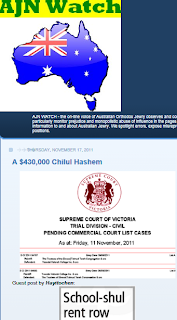 Click here:
But to answer your main complaint, can we just say that AJNWatch is run by a few volunteers who, believe it or not, each has another life as well. They toil for hours behind the scenes because they genuinely feel an obligation to try and improve matters - rather than simply sulk and kvetch. We hope to at least somewhat remove the חילול השם of silence and accusations of מדשתקי שמע מינה דניחא להו


Having said that, we do not claim to have even scraped the surface of  issues that require commenting upon. As a partial solution we are happy to host appropriate posts (like yours) that reflect the aims and viewpoints of AJNWatch. So - be our guest...
at 4:10 PM