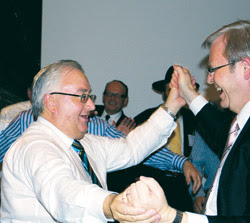 Michael Danby, by by taking a very public stand on behalf of the Jewish community of New Zealand against an allegedly corrupt Minister, has again confirmed that he is a courageous and fearless champion for the rights of Jews (and indeed other minorities) not only here in Australia - but anywhere in the world where their freedom to practice their religion is under threat.

How fitting that his most recent combat is taking place during Chanukah - the festival that celebrates the victory of the Jewish nation over the Hellenists of old whose intention was להשכיחם תורתך ולהעבירם מחוקי רצונך. 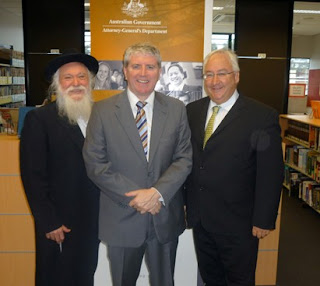 ﻿
On behalf of Jews everywhere, Michael, we thank you, we salute you and we are proud of you! 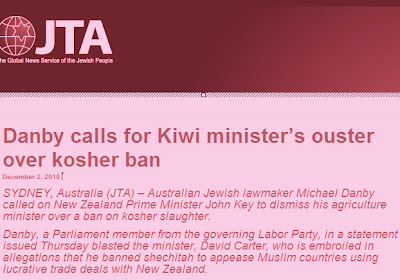 Danby said if the allegations against Carter were proven, his decision was "unethical and discriminatory.”
“What kind of minister would sell out his countrymen to foreign powers because he secretly thought it would be of some commercial advantage?" Danby asked. “In Australia he would be driven out of public life. That’s what Prime Minister John Key should do with Minister Carter.”
Carter, who denies the allegations, declared the ban on shechitah on May 27. Jewish leaders filed a lawsuit against Carter that was due to be heard Monday in the High Court in Wellington, but on Nov. 26, lawyers for Carter agreed to allow the kosher slaughter of poultry, averting a potentially embarrassing legal showdown between the Jewish community and the Kiwi government, whose leader, Key, is the son of a Jewish refugee.
No deal has yet been struck on lamb; kosher beef will likely have to be imported from Australia.
The Jewish community argued that the ban was a breach of New Zealand’s Bill of Rights. Shechitah has been carried out in New Zealand since 1843.
at 4:28 PM