AJN Watch presents its readers with a very interesting article from "Blitz" - a Bangladashi publication whhose pro-Jewish and Israel stance is something of a rrity in the Muslim world. Its banner states:
"BLITZ - THE ONLY ANTI JIHADIST NEWSPAPER CONFRONTING RELIGIOUS EXTREMISM AND PROMOTING INTERFAITH HARMONY - BLITZ FEARS NONE BUT GOD".

This article claims that the New Zealand authorities have been selling "treif" - which they  describe as "non-kosher [haram]" meat to Muslim countries - a fact that has only been disclosed now after the eruption of the scandal behind the Shechitah ban created by the Agriculture Minister David Carter whose financial interests in a company that exports meat to Muslim countries have only now been exposed. 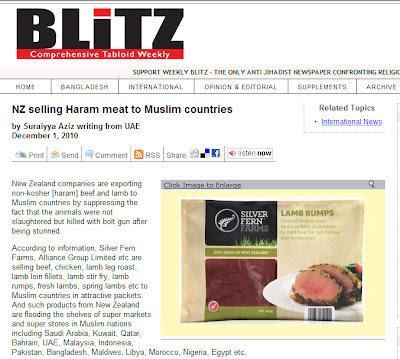 Jews and Muslims are forbidden to consume blood. If an animal is stunned before slaughter, not all its blood will drain away.
Silver Fern Farms as well as Alliance Group Limited are New Zealand's leading procurers, processors and marketers of sheep, lamb, beef and venison. According to laws in New Zealand, animals are stunned before being killed [kosher and halal slaughter is banned according to law of the country]. Iceland, Norway and Sweden also banned kosher and halal slaughter in the past. Under the newly instated Animal Welfare Commercial Slaughter Code in New Zealand, announced by Agriculture Minister David Carter, commercially killed animals would have to be stunned before slaughter. Under the new law, animals are being given electric shock or injection with the objective of getting it stunned [unconscious]. Subsequently the animal is killed either through slaughter or stabbing. In such case, the meat remains both non-kosher and haram for Jews and Muslims.
Before the Second World War, religious slaughter was tolerated in Europe, except for four countries [Switzerland in 1893, Norway in 1930, Poland and Sweden in 1938]. Religious slaughter without stunning was prohibited in several countries in Europe from 1936 to 1944 under the occupation of Nazi Germany [Germany in 1936, Italy in 1938, then in the majority of the other European countries according to the Nazi Germany occupation progress between 1940 and 1944]. The ritual method of slaughter as practiced in Islam and Judaism has been described as inhumane by animal welfare organizations in the U.K. and the U.S.A., who have stated that it "causes severe suffering to animals."
In 1978, a study incorporating EEG [electroencephalograph] with electrodes surgically implanted on the skull of 17 sheep and 15 calves, and conducted by Wilhelm Schulze et al. at the University of Veterinary Medicine in Germany concluded that "the slaughter in the form of a ritual cut is, if carried out properly, painless in sheep and calves according to EEG recordings and the missing defensive actions" [of the animals] and that "For sheep, there were in part severe reactions both in bloodletting cut and the pain stimuli" when captive bolt stunning [CBS] was used.
In 2003, the Farm Animal Welfare Council [FAWC], an independent advisory group, concluded that the way halal and kosher meat is produced causes severe suffering to animals and should be banned immediately. FAWC argued that cattle required up to two minutes to bleed to death when such means are employed. The Chairperson of FAWC at the time, Judy MacArthur Clark, added, "this is a major incision into the animal and to say that it doesn't suffer is quite ridiculous."
Halal and kosher butchers deny that their method of killing animals is cruel and expressed anger over the FAWC recommendation. In April 2008, the Food and Farming minister in the United Kingdom, Lord Rooker, stated that halal and kosher meat should be labeled when it is put on sale, so that members of the public can decide whether or not they want to buy food from animals that have been bled to death. He was quoted as saying, "I object to the method of slaughter ... my choice as a customer is that I would want to buy meat that has been looked after, and slaughtered in the most humane way possible."


The same years, the French Ministry of Food, Agriculture and Fishing has published ASIDCOM's Bibliographical Report on Religious Slaughter and the Welfare of Animals, as a contribution within the framework of a meeting on animals and society organized in the first half of the year 2008. This report quotes scientific papers and French veterinary PhD which support the equality or even possible superiority of religious slaughter to other methods of slaughter. This report quotes in particular the Ph.D work of Dr Pouillaude which concludes by: "religious slaughter would thus be a less stressing mode of slaughter. Conclusions of all the scientific experiments converge towards a firmly supported certainty: properly carried out, religious slaughter is the most humane way because it leads to less trauma to animals to be killed to be consumed for its meat".
For the Food and Agriculture Organization of the United Nations and the Humane Society International, "the animals that are slaughtered according to kosher and halal should be securely restrained, particularly the head and neck, before cutting the throat" as "movements [during slaughter] results in a poor cut, bad bleeding, slow loss of consciousness, if at all, and pain."
At the European Airlines and New Zealand airlines as well as hotels and restaurants are serving non-kosher as well as haram meat to the customers, without informing that the animal was stunned and killed with bolt gun. There is visibly tremendous campaign in United Kingdom against kosher and halal slaughter of animals. Some of the leading politicians in United Kingdom are also campaigning against kosher and halal slaughter and suggesting that halal and kosher meat should be banned in that country. They term kosher and halal slaughter as "barbaric method."
Another report on the accusations agains the Minister: 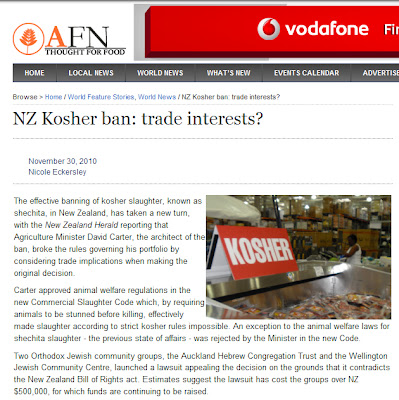 Click here for more.
And another article about the Shechitah ban in Blitz: 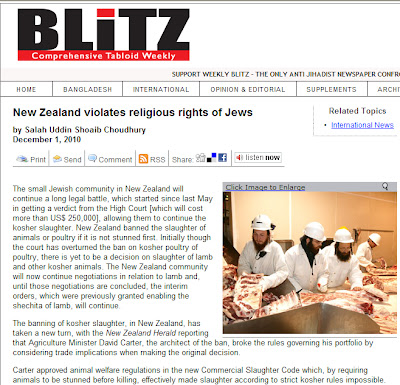