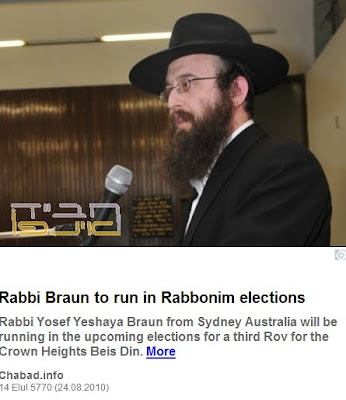 Rabbi Yosef Yeshaya Braun, is a scion of a renowned Rabbinical family. His grandfather was Rabbi Shlomo Zalman Braun, who served as a Rav and Posek in Flatbush and the author of the celebrated series “She'arim Metzuyanim Ba'Halacha” on Kitzur Shulchan Aruch. The Rebbe recommended those Sefarim and even disclosed his extensive use of them.
His father, Rabbi Chaim Elazar Braun, a tremendous Talmid Chacham who serves as the Rav of the Shaarei Tziyon community in Flatbush, carries on his ancestors' pursuits and has published the continuation of the series “She'arim Metzuyanim Ba'Halacha” on Shas (15 volumes have been published so far).
It was in this atmosphere of rabbinic scholarship and community leadership coupled with Halachic analysis and scrutiny that Rabbi Braun was raised. It comes as no surprise that his siblings too serve in important Rabbinic capacities: his brother Rabbi Moshe Shmuel Braun serves as a Rav and Dayan in Monsey, while his brother Rabbi Avraham Yaakov Braun serves as an esteemed spiritual leader in the Nitra community.
As a youngster, R’ Braun attended yeshivas Chasan Sofer and Kochav M’Yaakov Tchebin. Then he learned in yeshivas Tomchei Tmimim in Kiryat Gat followed by Oholei Torah zal and then yeshiva gedola in Sydney. When he completed his shlichus in Sydney he learned in yeshivas Tomchei Tmimim Lubavitch – 770 until he married.

Rabbi Braun had the privilege of being one of the “Chozrim” of the Rebbe's farbrengens during the early 90's, and was noted for his precision in preserving every word and utterance of the Rebbe. After marrying his wife Yehudis, daughter of the Mashpia Rabbi Berel Lipsker, member of “Vaad Lahafotzas Sichos”, he pursued his Rabbinic training, and in addition to the numerous hours of 'shimush' which he performed with his father and grandfather in Halachic rulings, he had the privilege of doing 'shimush' with the greatest Rabbanim and Poskim of our time, both within Chabad and without.

The Mara D'asra of Crown Heights, Rabbi Yehuda Kalman Marlow, famous for his short and concise Halachic decisions, recognized Rabbi Braun's rare grasp of Halachic knowledge and his excellent communicative talents, and requested that Rabbi Braun formulate detailed Piskei Din for public consumption on his behalf. The two spent hours together, delving into Halachic complexities. Till this day, Rabbi Braun remains in contact with the biggest Poskim, and is regarded as someone with a great proficiency in Halacha who is capable of accessing the rarest sources.

The tremendous knowledge which Rabbi Braun has acquired in various Halachic fields, as well as in the Rebbe's Sichos, has led numerous authors of Sefarim to send their work to him for Halachic review. He has also participated in his father's series, “She'arim Metzuyanim Ba'Halacha”, providing editorial assistance.

Fifteen years ago Rabbi Braun moved to Sydney, Australia, where he served as the Menahel Ruchni of the Mesivta and as a lecturer at the girls' seminary. A short while later, the members of the Tzemach Tzedek Community Centre turned to him and requested that he assume a Rabbinical position. Rabbi Braun acceded to their request and immediately entered his new role with great vigor. He invested a lot into his personal relationships with the members of the community, while concurrently establishing a Yeshiva Gedola as well as a Machon for Semicha.

Despite dedicating most of his time to Rabbanus and the leadership of the community, Rabbi Braun still devotes much time to Chinuch and Shalom Bayis. He arranged a special course for his community members on the subject of parental involvement with their children's studies, as well as a seminar on Shalom Bayis and a course on engagement and marriage.

Rabbi Braun's expertise in education has led the Department of Education of New South Wales (one of the five states of Australia) to appoint him as governmental representative overseeing the Limudei Kodesh curriculum for matriculation in all of its schools. Rabbi Braun was also appointed as a member of an exclusive three-member body which is assigned the task of writing the syllabus, curriculum, as well as serving at the helm of the examination committee.

In addition to his Torah studies and Halachic expertise, Rabbi Braun is a friendly and sociable family man, who also utilizes technological advancements for his community's benefit. He responds to Shaalos and inquiries via email, and additionally sends a weekly email to his community consisting of a relevant Chassidic perspective on topical issues, a Halacha feature, and more. Rabbi Braun's excellent articles on Chinuch and Shalom Bayis are featured regularly on Chabad websites such as Chabad.org and Chabadworld.net.

Rabbi Braun champions Achdus and cooperation. Despite the differences of opinion between Chabad communities in Sydney he was able to bridge those differences and promote unity. In recent years the two communities hold joint farbrengens and activities. He maintains good ties with the local Shliach Rabbi Pinchas Feldman and with the Rabbanim and community leaders of Melbourne and Sydney's Chareidi and Modern Orthodox communities. He has been invited numerous times to lecture at the “Yarchei Kallah” of the Chareidi Adass Yisroel community of Melbourne.

Recently Rabbi Braun received an appeal from the elder Chassidim and the community activists of Crown Heights, familiar with his exemplary and unique virtues, who requested that he tender his candidacy. Concurrently, Rabbi Braun received an appeal from a group of Yungerleit in Crown Heights who requested that he stand for election for the position of third Rav of the Crown Heights Beis Din. This will make it possible for him to offer his unique combination of youthful spirit and community leadership alongside broad and profound Halachic knowledge to the Beis Din.

AJN Watch, together with the rest of the Australian Jewish community,
wish Rabbi Braun Hatzlacha Rabba
at 4:33 PM