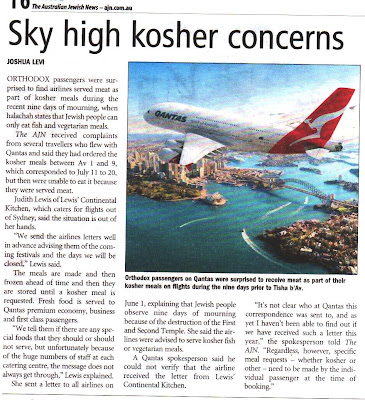 Instead of appreciating that they can get a Kosher meal whilst flying, it seems that some travellers expect Qantas to keep one eye on the Jewish calendar and another on the Shulchan Aruch.

Really, did those whingers expect Qantas to inform all employees to keep an eye out for 'forbidden' (Kosher) meat meals?

And then what? Captain announcements for Yaaleh Veyavo and Al HaNissim? A Shofar after Shachris in the month of Ellul?


(And not a little bit hypocritical of the AJN, as they continue to publicise “glatt treif” food establishments – week after week.)
at 4:19 PM