Look who's advising the Pope!

Shmuel Boteach sermonising to the Catholic Church: “Adopt Hilchos Yichud” !
Not such a bad idea, actually…

And here's another. Advising the Pope to push for Friday night family dinners. Yep, gefilteh fish and chicken soup should go far in solving the Church's problems. 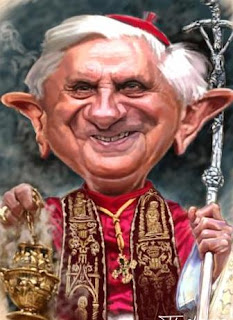 ...There is much in Jewish law and tradition that could bring healing to the Church, beginning with the Jewish laws of sexual seclusion. In Judaism a man and woman who are not married are not allowed to be in a locked room together. When I was rabbi to Michael Jackson, I took this law and applied it to his special circumstances. I told him the only way he could rehabilitate his reputation after the pedophile accusations was to simply forswear ever being alone with a child. I even grabbed Michael’s shoulders and made him promise me he would never seclude himself with a child not his own.

And for the two years for which we were close, he stuck to the script. When he and I launched our initiative to help children, the focus was on working with parents to make their kids a top priority, rather than with the kids themselves.
It wasn’t until he stupidly disregarded this simple advice and decided to share a bed – however platonically – with a young child and then brag about it on TV that he was arrested, and so began the inexorable decline that ended in his death a few years later.

THE CHURCH should embrace the same straightforward rule. No priest should be allowed to be alone with a child. Period. If a priest needs to speak to a child alone, the door must never be locked and there must always be the possibility that they can be intruded upon. If they walk in a park, it cannot be one that is empty. This way we’ll know that any priest who breaks the guidelines will be punished, whether or not he abuses a child. It would significantly curb the potential for child molestation, and might even discourage pedophiles from entering the priesthood...

For the full article, (where Boteach also makes the amazing claim that "Benedict has been a great friend to the Jewish community") click here.
at 2:17 AM