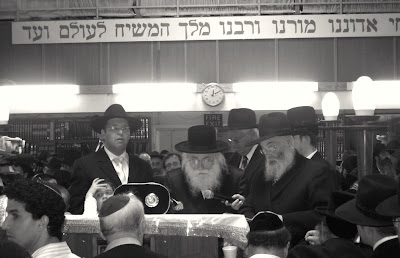 Yeshiva Yechi sign (# 2)
(Can anyone supply us with pictures of the Yechi signs versions 1 and 3?)
Since we posted the following petition (in the comments section of a previous post), we have had a large number of responses. However as the majority were either disrespectful (towards both sides of the debate) or plain boring and repetitive, we did not publish them. Now that Rabbi Telsner has responded to that petition, we feel that the story deserves its own blogpost.

Dear All,
This is directed at members of Anash and people who daven (or used to daven) at Yeshivah Shule. Our apologies if you have received this email and do not consider that the issues raised impact upon you in any way.
As you may be aware, we are running a petition directed to Rabbi Telsner and the Yeshivah Executive calling for the removal of the Yechi sign affixed to the back of Yeshivah Shule. We are aware that given the track record of the Executive, it is unlikely that they will respond to this petition, yet we believe it is important that they get a feel of the level of opinion that exists concerning the ongoing presence of the sign in the shule.

By this initiative, we certainly do not seek to persuade anybody as to how they should feel about the philosophy which stands behind the Yechi sign or, chas vashalom, provoke disharmony.

We believe that the sign is divisive and our aim is to restore Achdus to our Chabad community and, potentially, restore some pride and dignity to Yeshivah Shule and Chabad in Melbourne. Recent developments (the Asarah B’taives incident and response) have brought this issue back into focus.

From the outset, we have respectfully informed Rabbi Telsner and the Executive that we are running this petition and that we would like an opportunity to present the results to them. We have asked them to recognise that currently there is no other way for people to voice their opinion on this issue or generally.
Accordingly, we attach to this email a copy of a blank petition form for you to print off and sign (include name).

Upon signing you can either scan and email to one of the addresses below, or contact us via email and we will arrange to collect.

We can be contacted via email on yudhum@tpg.com.au or menachemv@axisc.com.au

We recognise that this is an emotive issue and people have strong opinions each way. Please do not feel under any pressure to sign our petition or join the group. Once again, our aim is to restore unity.

Please feel free to pass this on to others to whom it may be relevant.

Once again, apologies to anyone who may be offended by receiving this message. 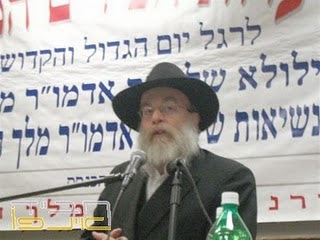 The Yechi Sign in Yeshivah Shule      by Rabbi Z.H. Telsner

בס'ד כ"ה שבט ה' אלפים תש"ע
The Yechi Sign that is displayed in the back of Yeshivah Shule has been in place for more than 18 years. The late Rabbi Y. D. Groner OBM gave this matter very serious consideration, taking into account the diversity of the shule membership and all associated issues, and issued a Psak that the sign should remain in the Shule. I see no reason to change the status quo and am upholding Rabbi Groner’s Psak in relation to this matter.

The Rebbe often emphasised that the way to bring Moshiach is through Ahavas Chinum (unconditional love) and we hope that our Shule community will unite and grow through mutual respect and Ahavas Chinum and we will hasten the coming of Moschiach.

May Hashem answer all our Teffillos for Brocho and Hatzlocho, and peace in Eretz Yisroel and the imminent arrival of Moshiach.

Wishing you a freilechin Purim.