Continuing the saga of the Sydney Kashrut 'wars' ( http://tinyurl.com/yc3smq2 ), this week's AJN carries an almost half-page advertisement by the KA ("sponsored by a Kosher Consumer") plus a couple of letters in response to last week's harsh words of Lea Weiss.

That KA ad does not make for easy reading, being extremely long-winded and employing a tiny font size which really strains the eye. We doubt that too many readers will bother to read through the entire screed. We invite those readers that made the effort, to forward us their comments. 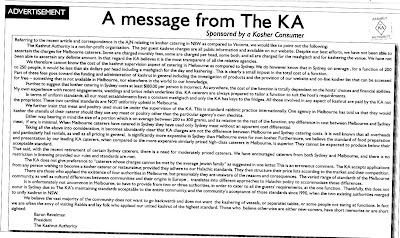 Zvi Rona's letter doesn't go very far in explaining the steep prices of Sydney's caterers. Whatever their 'quality', what can justify double and triple charges to that of Melbourne's caterers? As any Melbournian who has attended up-market weddings catered by Kosher Classique and Eshel will testify, it is sheer nonsense to claim that their their quality is not equal to Passion8. They, together with Ungar and Epicure have shown their flair and talents at functions attended by the highest echelons of the political and busniess world.
In fact the feedback that we received from readers who attended THAT wedding in Sydney was, that it was one of the most beautifully catered weddings that they had attended.
Ah, well, Al taam vare'ach ein lehisvake'ach.

As for Rona's claim that Chabadniks make their weddings in New York to be close to the rebbe, we have news for him. The rebbe sadly passed away 3rd Tammuz 1994 - almost 2 decades ago. But still chassidim continue to make their simchot in NY because of Sydney's hight catering costs. (We have received a number of off-blog emails confirming this.)
FACT:  Far fewer Melbourne Chabadniks travel to NY for the simchot.

As to Rona's suggestion that they should have their Simchot in Israel, the answer is, yes indeed. Many Sydneysiders do exactly that. Possibly for similar reasons.
at 1:34 PM