Look who's catering for the Charedim now! JPost publication supervised by Chassidic Rebbe!

Despite the fact that Chareidm in Israel may have worse enemies than the Jerusalem Post, no one would claim that it was ever a friend of the "frum" community. Thus we were more than surprised to learn that they have just launched a weekly magazine "Kosher English" aimed at Israeli Charedim.

Who could've ever imagined that the Jerusalem Post would one day proudly announce that it is launching a publication davka for Charedim, edited by a religious woman heading a team made up entirely of Charedim?

But wait, there's more. The magazine will enjoy 'complete independence' and will be supervised by a spiritual committee headed by the Admor of Boston, Rabbi Meir Horowitz!

(Yossi Aron, the AJN's 'religion reporter', eat your heart out...) 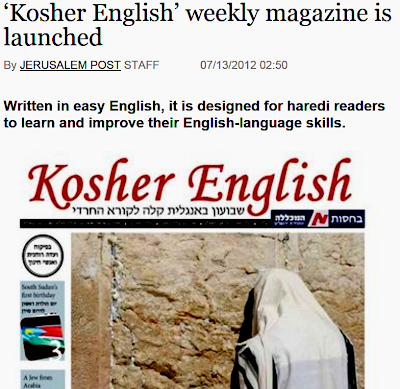 The Jerusalem Post Group has launched a new weekly magazine for harediKosher English.

Written in easy English, it is designed for haredi readers to learn and improve their English-language skills.

The magazine, whose first edition was published on July 5, contains a mix of Israeli and international news stories as well as special articles for the ultra-Orthodox community, including profiles of religious personalities.

In addition, it features instructional items about using English at work and pieces on Jewish communities across the world, as well as word games and a family section.

Next to each article is a dictionary box with translations into Hebrew of difficult words, along with information on how to pronounce them.

The editor of the paper is Tami Kalish and her entire team is haredi.

All content in Kosher English is under the supervision of a religious committee, led by a prominent rabbi and Jewish educators.

“The idea was to create a newspaper for haredim in easy English,” Kalish said. “The challenge is not only to keep to the principles of Halacha such as modesty and avoid lashon hara (slanderous talk), but also to strengthen faith in Hashem and learn English at the same time.”

“One example of this in Kosher English is a serialized story in easy English based on the bestseller by Rabbi Aharon Margalit, As Long As I Live, which describes the difficulties and suffering in his life that he managed to overcome thanks to his strong faith,” she said.

Kalish stressed that the magazine is not affiliated with any political party or religious stream, which makes it accessible to the whole haredi world.

Ronit Hasin-Hochman, CEO of The Jerusalem Post, said that the magazine is perfect for haredim wishing to read and learn in English in an easy and kosher way.

“The Jerusalem Post has extensive experience in teaching and improving English skills among diverse populations in Israel,” Hasin-Hochman said.

“When the haredi community turned to us, we decided to invest our knowledge and reputation in this unique target audience.

“The whole magazine staff is haredi. They enjoy complete independence and are supervised by a spiritual committee headed by the Admor [Rebbe] of Boston, Rabbi Meir Horowitz, who is based in Jerusalem.”

Hasin-Hochman noted that the advertising agency selected for the new weekly magazine is the well-know haredi agency, Gal-Oren, which is currently engaged in a campaign to introduce the product to its haredi market.

“We are pleased to be a part of another innovative move in the haredi community,” said Oren Elimelech, CEO of Gal-Oren. “We look forward to a successful venture.”
at 2:55 AM