Is the Jewish News being honest with circulation figures?

Maybe we are missing something here, but as we read it, the Sydney edition of the AJN claiming that the ENTIRE Jewish community in that city reads this newspaper (100% reach in the Jewish community each week"). What an amazing and brave or rather foolhardy statement.


Media experts that we spoke to suggested that they risk being charged with false advertising.

We aren't quite sure where to find their latest circulation figures (or if the AJN even bothers to get audited these days), but we did find this thanks to Google:

showing us that in December 2010 their circulation was 3897 - and going south. It wouldn't be unreasonable to presume that two and half years later that figure would be closer to 3500 - if not less.

Now lets's have a look at the same AJN (from the edition 2 weeks ago) where they reported the results of the latest census which showed that the Jewish population of NSW - mostly in Sydney - was 39731. 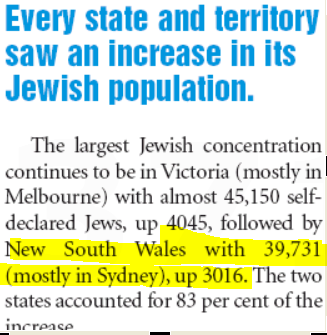 So the AJN wants us to believe that each copy of their newspaper is actually read by 10 people!

We wonder how well that would go down with the ACCC and their views on "Misleading & deceptive conduct" and false advertising.

One often wonders when seeing non-Jewish advertisers spending big dollars with the AJN, what circulation figures they have been sold. A previous editor of the newspaper admitted publicly that "the Jewish News isn’t a newspaper based on circulation". 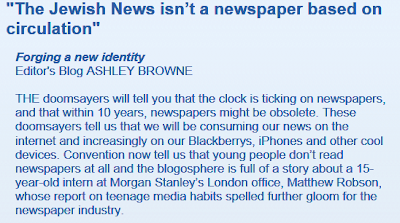 Looks like the current powers that be have gone back to making unbelievable circulation claims.

Let's hope it doesn't get them into an embarrassing public mess.