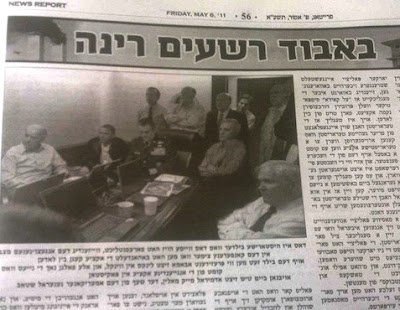 Almost as big news story as the execution on Osama bin Laden.


Here's a missive we received from one of our favourite letter-writers, Rabbi Mordy Katz (aka Robert Weil):

Hi there, are you guys asleep at the wheel? You are so quick to try and scandalise the AJN at every opportunity, but here is a far greater Chillul Hashem that has had worlwide repecussions perpetrated by Charedi morons with XXXX for brains.

Hope you will post on your blog. I look forward to the comments. 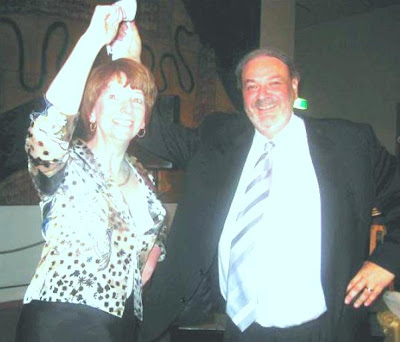 Thanks to the Caulfield Shul website where we found Rabbi Mordy 'mitzvah-tanzing' with PM Gillard.


Who knows, maybe next time it will be Hillary Clinton.


(The above would make an interesting photgraph after a "Di Tzeitung" rework - showing Robert dancing on his own....) 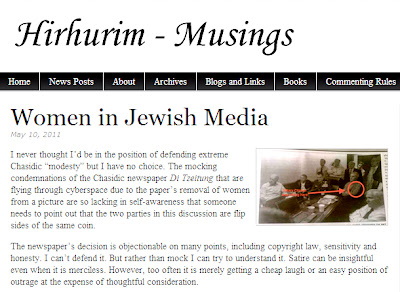 The Talmud (Avodah Zarah 20b) says that a man should not think improperly about women during the day because that may cause an unnecessary emission at night. This is a broad requirement to (try to) control your thoughts. The divinely implanted desire to procreate and its attendant instincts make this quite a challenge. But, as any successful person will tell you, if you surrender without a struggle and give up even if you sometimes stumble, you will never get anywhere in life.

A Jewish community newspaper needs to ensure that its published material does not contain inappropriate material. What is inappropriate? Libel, profanity, vulgarity and more. Pictures that cause improper thoughts are also inappropriate. I think all reasonable people would agree that family newspapers should refrain from publishing provocative pictures. What makes a picture provocative? Forgive the tautology, but a picture that provokes improper thoughts is provocative. To some degree, this varies by reader, which makes the determination difficult and subjective.

In today’s world, standards are on a constant decline. A recent issue of Newsweek featured naked pictures of men with small smiley faces over their most private parts. This is what passes as decent today. Bus stops and subway trains are filled with half-dressed women, peddling their bodies in order to sell products to consumers. Decency is relative, and today it seems relatively gone. Religious and family publications cannot give in to this trend and must maintain their standards.

If it were up to me, a newspaper would have a committee that uses common sense and community standards to determine what pictures are provocative. I have no doubt that, since this exercise entails making judgment calls, such a committee would be publicly mocked as a censorship board and a nudity monitor. Another option is to simply refrain from publishing any picture that anyone might remotely consider inappropriate. Even more extreme is refraining from publishing pictures of women at all.

I don’t agree with this last choice. I think too much is lost — to women and to the public — to justify the blanket policy. However, I can respect the decision to refrain from making decisions on women’s pictures. I understand the desire to avoid the mockery of a censorship board whose job is to determine which women, clothing and poses are sufficiently attractive to arouse readers. The mocking class of commentators have created a culture where this last option is appealing and then they mock people who take the path they feel forced into.

I prefer moderate and flexible standards. But I can understand, even if strongly disagree with, those who choose otherwise.

See a CNN interview with the editor of Di Tzeitung, who I think handles himself admirably even if I disagree with his interpretation of Jewish law: 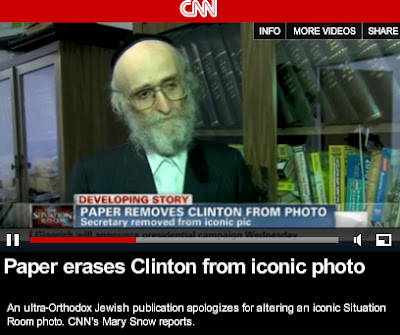 And from one of the over a million (fair dinkum) websites﻿ discussing this most important affair... 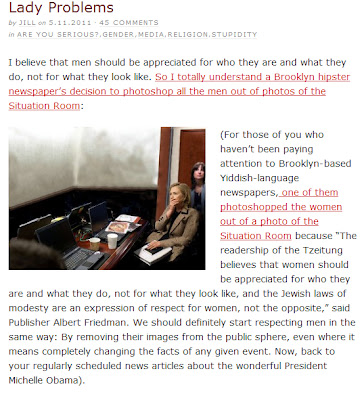